We’re living in times when the world is yelling at the top of its lungs. It’s yelling at all of us. It’s yelling at us from the TV, the radio, on the web, and now at every business we enter (if we’re allowed to enter it). And if we’re not, we’re being yelled at about that. 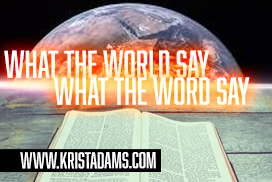 The world says don’t get too close – you might get infected. Stay inside, stay away. This virus is serious. Take it serious.

The Word says by the stripes of Jesus you were healed. My Lord is my strong tower, my refuge, and my shield. You am redeemed from the curse of the law, which includes this virus.

The world says you should be in fear because everyone’s getting this and when you get it, you could die.

The Word says you are loved by the Creator of Heaven and Earth and He has not given you a spirit of fear, but of love, power, and a sound mind.

The world says that we live in times of uncertainty, you can’t know what is going to happen, so you better be well prepared, hoard whatever you think you might run out of.

The world says don’t touch anyone, you’ll make them sick.

The Word says You shall lay hands on the sick and they shall recover.