If you asked a group of Christians this question, you quite possibly would get a variety of different answers. Most would say of course God is good. But then there would be some that have a little bit of doubt in their mind. They think, “well I am sure for the most part He’s good, but you know He does put in sickness on people to teach them things. He did let my so-and-so die. That’s not really good in my mind.” Etc. etc. 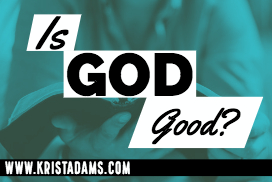 If you look at Acts 10:38, it says, “ …how God anointed Jesus of Nazareth with the Holy Spirit and with power, who went about doing good and healing all who were oppressed by the devil, for God was with Him. “

No! If you look at what the Bible says, it says God doesn’t use sickness. Of course you may get a few people that want to point out some scriptures in the Old Testament. However, most of these people will read that (or those) scripture in one translation. They won’t check it against another translation. They won’t read any commentary on it. They won’t check what the actual Hebrew says (or Greek for the NT).  And then they want to think that because they found these few isolated scriptures that barely hint at something that they far outweigh the entire Bible and what it says on the subject. They’ll take those two, three, or four scripture and forget the two hundred other ones that speak contrary to it.

The Apostle Paul said that the Christians at the church a Berea were more noble (or fair-minded) than those in Thessalonica because they search the Scriptures daily to see if what the apostle Paul said was true (Acts 17:11). Those Christians at Berea were Bible students. They didn’t take what someone told them and believed it. They looked and saw what the Bible says for themselves.

John 10:10 says, “The thief does not come except to steal, and to kill, and to destroy. I have come that they may have life, and that they may have it more abundantly.” That there makes a clear dividing line in the sand. If it’s bad or if it kills, steals, or destroys – it is from the devil. If it gives life and is good – it is from God. God is a good God. The Bible says repeatedly that Jesus was moved with compassion and healed them all. In the Old Testament, it talks repeatedly about God being filled with compassion. Another word for compassion is mercy. God is filled with love. God is a good God.

That alone should put to rest any thoughts we have of “is it with God‘s will to heal us?” God was moved with compassion, and God is full of compassion. What does compassion do? Does compassion sit there and let someone suffer and die when they have the ability to do something? No, compassion moves people and they do something. That’s what the Bible says God has done and is doing.

But everything He’s ever going to do, He’s already done through Jesus. The problem is that too many people are not taking enough time – have simply listened to what a person in a pulpit has said, and they don’t even read the Bible for themselves to figure out if what that person is saying is true. We have a part to play in receiving God’s compassion. We have to mix faith with it. It’s our faith with God‘s compassion – that’s where the healing comes from.  Jesus told the woman with the issue of blood, “Daughter, your faith has made you well. Go in peace, and be healed of your affliction.” It wasn’t just God’s compassion and desire to heal that healed this woman. It was her faith working together with God’s compassion and desire that did it.

Believe it. Stay with the Word and Spirit of God.