There was a question that was asked in one of the Facebook group’s I’m in, that I found quite important. The person in the group had this question:

As I looked at some of the comments, which some were spot on, it seemed some thought that the question was not about how do you say no, but do you say no. So it came down to, “Do you allow non-Christians to be on the worship team?” That’s a pretty important questions if you don’t know the right answer. 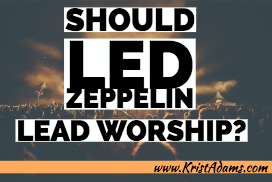 I remember back when I was in college, I was part of a campus ministry and as one of our outreaches, we would have a game night in my dorm room. I was a Residential Assistant, so everyone in the building knew me. There was this one guy on my floor though that started coming and hanging out with us. He played drums, bongos, djembe – those type of things. He started coming to our campus ministry meetings and after a while He wanted to get involved. He wanted to be in the worship band.

I relayed this to our campus pastor and to my amazement, he was all for it. I was still fairly knew in the Lord. I’d only been saved about 5 years or so, but I knew that something was wrong with that.

He explained to me though that we should be accepting first and then expect a person to change, accept the Lord, etc afterwards. I had no problem with that. I agree with it (to a degree). Yes, you accept people. You love people. But that doesn’t mean you put them on the worship team. You don’t let them get up there and preach the Gospel either, because they know nothing about either of them.

Years ago, decades ago, the praise and worship leader was not known as such. They were called the minister of music. A much better title to be honest. Too often we think praise and worship is just about singing songs. If that’s your thought, you are dead wrong….Biblically speaking.

Worship is more than just singing some songs. It is leading people into the presence of God. It is making a way for the Word of God to be preached. It preparing the hearts of the people to receive the Word. It’s a ministry like that of John the Baptist – “I must decrease and He must increase.” The worship band is to Glorify God – increasing Him and His glory, and decreasing the thoughts, glory, focus of the people. Their focus should get off of themselves and what is going on and onto God because you are leading them into God’s presence. It’s not just about singing some songs. If that’s all it was, we’d get the world’s best bands and musicians to stop touring and come lead worship.  We could get Led Zeppelin, AC/DC, all the top performers – get them all and have them come lead worship. That would draw the crowds in. Actually, that might. But so would burning the church down. That doesn’t mean we want to do it. Because just because it would draw the crowds in, that doesn’t mean it would draw God in. I’s not just about singing some songs. It’s about so much more than that.

Too often people think that just because someone is a good musician that would make them a good worship leader. Not true. Playing and instrument, singing – that’s one thing. Leading people in praise and worship – that’s totally different. I think too often people are allowed to be on the worship team, more so lead worship because they have a good voice, can play an instrument good, or even ‘have connections.’ Just because you’re a good public speaker, that doesn’t mean you’d be a good preacher. There’s more to it than speaking. And there’s more to being a worship leader (and on the worship team) than singing and playing an instrument.

If you go back and look throughout the Old Testament, you’ll see that all the time the worshippers, the praisers, the ministers were brought out – they were all Jews. They were all “believers” in a sense. They all followed after God Almighty. How can you lead someone into the presence of someone you don’t even know? You can’t. It doesn’t matter if you’re doing the singing, playing guitar, drums, keyboard – whatever – you can’t do it. It’s Biblically wrong.

Being in a worship band is a place of ministry. Every person on a worship band should be praying and prayed up as they get on stage to usher in the presence of God. They shouldn’t just come and rehearse and start singing. No, there should be prayer involved, just like every other ministry position. They should get prayed up and get the anointing on them to do that which they are called to do. But first, they must be believers. It’s a Biblical truth.

God bless. Stay with the Word & the Spirit.

If you have thoughts on this, let me know in the comments below.