If you haven’t yet, check out Part 1 of this series here.

There’s a commercial that comes on the radio around every Valentine’s Day where I live. It’s the same year after year. There’s a voice-over guy that tells us that ‘if your wife or sweetie says that you don’t have to get them anything for Valentine’s Day because they knows that you love them, then it’s time to go to this jewelry store.’ And then they tell you how much that a diamond for year sweetheart is going to make them love you even more and such and such, junk and junk, lies and lies. The sales pitch here is that this jewelry store knows your wife better than you do. Not only do they know your wife better than you do, they know how she feels better than you do. They know her specific love language and know how to cater to her, how to make her feel loved – all better than you do. 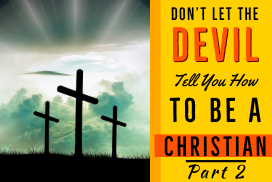 This is the same lie that Satan told in the beginning.

Now the serpent was more cunning than any beast of the field which the LORD God had made. And he said to the woman, “Has God indeed said, ‘You shall not eat of every tree of the garden’?” And the woman said to the serpent, “We may eat the fruit of the trees of the garden; but of the fruit of the tree which is in the midst of the garden, God has said, ‘You shall not eat it, nor shall you touch it, lest you die.’” Then the serpent said to the woman, “You will not surely die. For God knows that in the day you eat of it your eyes will be opened, and you will be like God, knowing good and evil.” – Genesis 3:1-5

Satan convinced Eve with lies of “Did God really say that? You could be better if you listen to me, not to God.” Satan has no new tricks. It’s the same ones he’s used over and over, just tailored to fit your situation. Don’t fall for his trap.

If you look in the New Testament, you find this same thing. The whole book of Galatians was written because people came in and told the church that they had to live a certain way so they could be a Christian. The Christians at Galatia listened because these people seemed like they knew what they were talking about. The issue was that the church in Galatia was filled with baby, immature Christians. They didn’t know the Word. People came in and said that salvation was by “the works of the law” – to be a Christian, you had to keep the law. The Christians there were allowing someone outside the church to tell them how to live.

Paul tells the Galatians that this same issue that was happening there had also gotten to one of the top leaders of Christianity – the Apostle Peter.

Now when Peter had come to Antioch, I withstood him to his face, because he was to be blamed; for before certain men came from James, he would eat with the Gentiles; but when they came, he withdrew and separated himself, fearing those who were of the circumcision. And the rest of the Jews also played the hypocrite with him, so that even Barnabas was carried away with their hypocrisy. – Galatians 2:11-13

We follow what the Bible says. Yes, we follow what our church leaders tell us, as long as it agrees with the Bible. The Apostle Paul said, “Imitate me, just as I also imitate Christ (1 Corinthians 11:1).” Sometimes it’s a lot easier to follow a human being because we can see them, and we’re at the level in our faith that we need to see a flesh and blood person be our example. But we only follow them to the degree that they follow Christ. If they ever stray from what the Word says, you stop following them – period. It doesn’t matter if they’re a nice person. It doesn’t matter if you’ve followed them for years and years. It doesn’t matter if they’re your best friend or your relationship is tighter than any other human on the planet. You don’t follow them if they’re not following Christ.

Look back to Genesis with me.

Eve had an issue to begin with that allowed the devil to lead her astray. What did she tell the devil that God said to her? Eve says that God told them about the tree of good and evil: “You shall not eat it, nor shall you touch it, lest you die.” That’s not what He said though.

And the LORD God commanded the man, saying, “Of every tree of the garden you may freely eat; but of the tree of the knowledge of good and evil you shall not eat, for in the day that you eat of it you shall surely die.” Genesis 2:16-17

Be diligent to present yourself approved to God, a worker who does not need to be ashamed, rightly dividing the word of truth. – 2 Timothy 2:15

If you just look at the surface of what the Word says here, and don’t dig any deeper, it appears that Eve could only know what God said because Adam had told her. It says that God told Adam, not Eve (there’s a whole lot more to it than that though). But for us today, how much of the Word have we heard because someone told us, rather than we’ve read it ourselves, we’ve studied it out ourselves? Oh yes, it might be put up on a big screen, on a power point, but did you read it yourself – in context? Or did you allow someone else to tell you the Word, hoping that their interpretation and their paraphrasing is correct? You can’t do that. You have to know the Word yourself.

Church should not be the main course of your life. We should be reading, studying, getting to know the Word and our Lord every day. Church day should just be the day we do it with other people and someone that has a message for us, based on the Word that we should already know.

The other thing about this scripture is the word depart. The Greek word for depart gives this idea of slowly turning. The turning is so slow and so unnoticeable that it will happen without the person even realizing it. So they start picking up this idea and that false doctrine and slowly start pulling away from the truth, slowly start listening to the devil how to be a Christian. Then one day, without them even knowing it, they have rejected Christ and are living for something else entirely. They may call it Christ, but it isn’t. The Apostle Paul told us that there is another Jesus, another Gospel, and another Spirit. It’s not another one; it’s just a distorted version of the truth. That’s what the devil does.

Remember, Satan will use thoughts or he’ll use other people to get you off from following Christ, to live your life as a Christian, how he desires. We know the devil uses thoughts because that’s what he has always used. In the Garden, he spoke to Eve and gave here a thought, during the Lord’s temptation in the desert – he spoke to Him and gave Him thoughts. John 8 and Revelations 12 and 20 speak of the devil using his words – thoughts, against us. We have all had thoughts that were ungodly. They aren’t ours, just lies from the devil. But don’t take them. Don’t speak them, dwell on them, think on them – or you will act on them eventually.

The devil uses people as well, even fellow Christians, to get us to follow Him, so that he can define to us what a Christian is and how we should live.

From that time Jesus began to show to His disciples that He must go to Jerusalem, and suffer many things from the elders and chief priests and scribes, and be killed, and be raised the third day. Then Peter took Him aside and began to rebuke Him, saying, “Far be it from You, Lord; this shall not happen to You!” But He turned and said to Peter, “Get behind Me, Satan! You are an offense to Me, for you are not mindful of the things of God, but the things of men.” – Matthew 16:21-23

The devil even deceived the Apostle Peter into accepting the false idea of what a disciple of Jesus should be. If the apostle Peter could be deceived, so can we – if we don’t follow what the Word of God says. But also notice that the devil was using Peter to try and get Jesus to stop walking in the will of God. If the devil will do that to them, he will do it to us. He is no respecter of persons.

There are so many Christians today, whether from the ignorance of the Word or the pressures of the world, are compromising what they believe and allowing the devil to tell them how to be a Christian. It happens on the stage of pop culture on TV shows and it happens in local schools and on the job. It happens through thoughts and peer pressure.