I was listening to the radio the other day, flipping through the channels and I paused for a moment on a call-in show. The woman talking to the host asked him what she could do about something going on in the national spotlight. After the host said that there was basically nothing to do, the woman responded with, “well, I guess we’ll just have to pray really hard.” 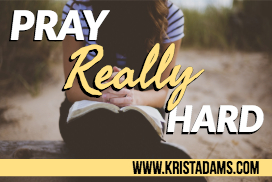 I wanted to look at her response though – pray really hard. In Christianity today there seems to be this idea that God will answer our prayers if we pray really hard. It’s this idea that God will somehow see how much energy and effort we are putting into praying and answer our prayers. He might look down and see that we’ve been praying over this issue for the last three weeks and suddenly say, “well, that’s enough time spent on that pray. I’ll answer it now.” I don’t mean to make light of the situation, but I do mean to make you think. When we look at any situation, anything in life, whether spiritual or not, we need to view it through what the Bible says. Does the Bible say anything about praying really hard to get our prayers answered? No, it does not. That doesn’t mean that this idea hasn’t been preached across the world. It has.

Think about it. Results in pray come by praying really hard – can you define ‘really hard?’ What does really hard mean? Is that two hours? Two weeks? Time without food praying? You can’t define it. However, that’s okay because the Bible doesn’t say anything about that. What does the Bible say?

Jesus said to him, “If you can believe, all things are possible to him who believes.” – Mark 9:23

For assuredly, I say to you, whoever says to this mountain, ‘Be removed and be cast into the sea,’ and does not doubt in his heart, but believes that those things he says will be done, he will have whatever he says. Therefore I say to you, whatever things you ask when you pray, believe that you receive them, and you will have them. – Mark 11:23-24

The Bible also says, Jesus says, that all things are possible to those who believe. So you have to be believing when you pray. Just praying, just mouthing words – no matter how long or how much sweating you do or meals you miss, will not get your prayers answered. There used to be a bumper sticker that said, “Prayer Changes Things.” Well, it doesn’t. Believing prayer changes things. You have to believe. There are many people just going through a routine, just saying words – all without believing and they aren’t getting anything. We have to believe.

But when do we believe? When do we receive the answer to our prayers? Mark 11:24 answers that question. Look back at it.

…whatever things you ask when you pray, believe that you receive them…

That’s what the Bible says about prayer. It doesn’t say we pray hard to get answers. It says we believe and we use the name of Jesus. So the next time that you go to pray, don’t think that you need to spend hours upon hours in prayer. You just need to pray in the name of Jesus and receive the answer. Stay with the Word and the Spirit.