Well, the election is over and the prayers of the saints have seen Donald Trump elected as the next President. I do have to wonder though, if all the churches and Christians have stopped praying. I don’t mean that in a bad way or to attack anyone. However, the church has a good history of praying for the government during election time and then forgetting about it for the next 2 or 4 years….or until there is a major crisis that comes up.

I told my wife, many months ago, that it didn’t matter who won, the nation was going to be divided after it was all said and done. It was obvious to anyone who was watching and not too focused on the election, but focused on the nation. Our nation is divided now more than ever. In fact, I would say it is divided more now (at least visibly) that any time under the Obama administration. 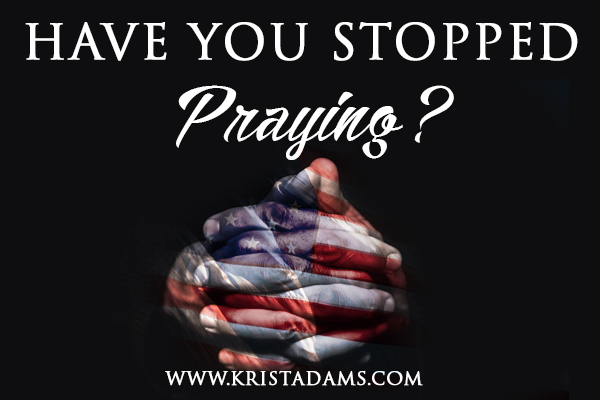 So I wonder, with the election over, have you stopped praying? There was a big pull on to pray for the election. Christians stood against Christians is the primaries and to a degree in the general election. But as it was coming down to Trump vs Clinton, it seemed reality set in with many Christians. There was a possibility that Clinton could be President and the thought of what that could bring drove many to prayer. Thank God for people like Franklin Graham and other who held prayer meetings before the election.

However, with the election over, have Christians stopped praying for the government and the nation? If you are one of those Christians who prayed earnestly prior to the election, but have since stopped, here’s my question: does your faith and trust lay in Donald Trump? One might think so. He’s now elected and if Christians have stopped praying, that could be a reason. They now trust that he will fix it all.

No. The same battle cry holds true before and after the election: Only God can fix the United States. Trump cannot fix the United States because what is going on is a spiritual problem, not a natural problem. Yes, there are natural things that must be done, but more so, there are spiritual things that must be done. And the main thing that every Christian can do is pray.

1 Timothy 2:1-2 says, “I exhort therefore, that, first of all, supplications, prayers, intercessions, and giving of thanks, be made for all men; For kings, and for all that are in authority; that we may lead a quiet and peaceable life in all godliness and honesty.”

Notice that the scripture does not say anywhere “for the election” or “during the election.” This scripture does not mean to pray for our leaders only at election time. It means to pray for our leaders all the time. Right now Donald Trump is choosing who will make up his administration. Christians should be praying that He would have the wisdom of God and choose the right people. We should be rebuking demonic spirits from around him and those he is selecting.

If Christians have stopped praying for our government, for our nation, as I believe many have, we are leaving a huge door open to Satan. Look at what is going on in our nation: riots and muggings are occurring because someone’s choice didn’t get elected. Division is increasing among American citizens. Government officials have publicly declared that they will not follow the laws set forth by the new President and Congress, or the laws already on the books that aren’t currently being enforced.

The nation is not out of the hole that it has dug for the past eight years or so, not by any means. So for Christians to stop praying just because the election is over is for them to give up when the job is only half finished. God had mercy on us during the election because we finally prayed. We finally realized that if we didn’t pray, things were going to get worse. And because we did, God had mercy. How dare we take His mercy and throw it back in His face by no longer praying – no longer obeying His Word.

Look what we still have in our government and nation. Abortion is still legal, homosexual marriage is legalized and normalized, the nation is being taxed and forced into buying something they don’t want, godless laws are on the books that most of us don’t even know, we’re giving millions and millions to people that want us dead, and those are just for starters. If you think all those things are going to change just because Donald Trump is going to be President, you’re as crazy as a loon.

No! Those things aren’t going to change because of natural circumstance, but because of spiritual action. Not until we get serious about praying for our nation. I know the church isn’t serious because I’ve known of too many churches, even ‘mega churches’ that didn’t start praying until 2 weeks prior to the general election. I even know of some pastors who wouldn’t even talk about the election besides a simple nod to ‘pray for the upcoming election and do your research.’ I don’t know if they didn’t want to offend anyone or if they don’t have a backbone to tell the truth or what.

But someone needs to stand up and tell the truth. Things aren’t going to change until the church – you and me – gets serious about praying for this nation. That includes praying for the government, the nation, and especially the church. As goes the church of a nation, so goes the nation.

I urge you to stand up, kneel down, walk around – whatever you do – and pray for our nation. Take your authority over demon spirits that are still coming against this nation. Jesus Christ appeared to Dr. Kenneth E Hagin in 1979 and told him:

If the Christians of this nation had done what I told them to do in My Word and had prayed for the leaders of their country, they could have kept those evil spirits you saw in 1970 from operating in this nation. None of those upheavals would have occurred in your nation. You would not have had the political, social, and economic disturbances in this nation, and the President never would have made the mistakes he made. In fact, I’m holding the Church responsible for the President’s mistakes.

When I heard Jesus say that, I cried out, “My God!” and began to weep. Jesus continued, “Yes, the Church is responsible before God Almighty. I know when you tell that to some Christians, they will laugh. But you wait until they stand before My Judgment Seat and see if they laugh when they are the ones who will receive the judgment.

Christians have the authority and the responsibility to stop demonic spirits from operating in this nation. We have the authority to turn our nation in the direction it should go. The problem is that the church has been asleep at the job.

Just because the election is over, that doesn’t mean the job is over. We still live in a nation with an ungodly culture, but it is a culture that we can change because Jesus Christ gave us the ability to do so in prayer. Keep praying. Stay with the Word of God and the Spirit of God.