Another debate for President of the United States has come and gone, and another one has been slated. After watching all the men in the one woman argue, debate, and plead their case for why they’re the best candidate, there is still something we did not hear. After all the words and the rhetoric, we are still left wondering who to vote for. And if we’ve already made our decision we have either heard from God or we’re walking after the plans of men – our plan. 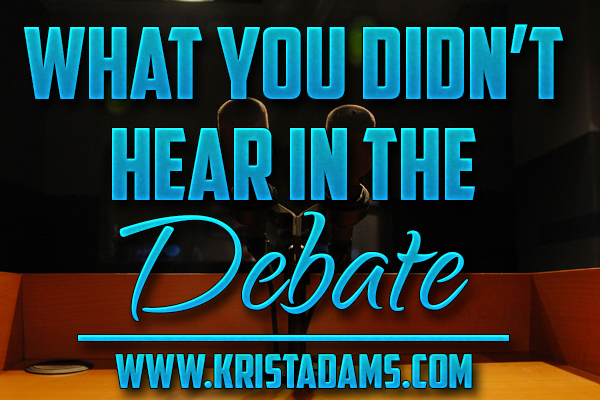 Now you may ask, does God anoint people to be President? The answer is: Yes, God does anoint and God does choose the President of the United States, just as He chooses leaders of the other nations. Whether it be the leaders the people ask for, the ones they deserve, or the ones they are blessed with – in one way or another, they are “chosen” by God.

When George W. Bush was elected President of the United States, it was because God selected him to be the President. It was prophesied that George W. Bush would be the next President of the United States before he even decided to run. (Google ‘George W. Bush burning bush prophecy). It was prophesied by others that he would be President even as the debacle in Florida was taking place with the voting machines. It wasn’t just one lone voice declaring that either. It was many who spoke as the Spirit gave them utterance – to declare the will of God.

You see, the church should be the most intelligent people group on the planet. They should know what is going to happen before it happens, why it’s happening, and God’s response to it – and thus, the church’s response.

But what happens is that men, Christians, do not believe God’s Word, and instead, they insert their own ideas and plans into the church and their own lives. Instead of following after the Spirit of God, they follow after the desires of men.

What does this have to do with the debate, the President-to-be? A lot. Instead of following after what God wants, we seem to be following after our own desires, our own plans, even after seducing spirits, and we aren’t going to receive the blessing God intends for us or our nation.

Some may say that of course they have looked to the scripture. They may say that they’re pulling for the most Christian candidate there is. But how do you know that? How do you know the heart of man? You don’t. But God does. The Word of God gives us God’s general will for life and nation, but it is the Holy Spirit of God that gives us specific direction for our lives and our nation.

Have we asked God who He has anointed, whom He has selected to be President? Many have not. If you have, praise the Lord. But I have seen and know many have not.

What we have today is the result of voting for the wrong candidate. In 2004 and 2008, we had two choices laid before us as a nation – one was ungodly and one was not. Not to say that either candidate was great, but it was clear that one was not. And yet, the nation as a whole was seduced into believing that the ungodly candidate was good for our nation. And God allowed the choice of the people of our nation to stand. And you can now look around and see the result of that choice.

We must understand that if we, as Christians – as a nation, choose who we want to be President, it’s very likely, we will choose wrong. After all, as it stands now, just in the Republican party, there are around 15 candidates. That’s a one-in-fifteen chance of getting it right. That’s fourteen chances to get it wrong.

I remember back during the campaigns of 2001, I was standing in a gym at a Christian youth camp and a TV was on airing the news of Governor George W. Bush making a speech. This was after he was chosen as the Republican nomination. As I stood there keeping an eye on the kids, another leader remarked how he wasn’t going to vote for him because he didn’t like his stance on the economy.

This man was clearly choosing his candidate, based on his circumstances and his faith in a man, not on God’s choice. He was trusting his income and his financial future with the President, not with God. If we are not careful, we can get in the same situation – the same one we were in during the 2004 and 2008 elections.

So I urge you, stop your rooting and pulling and campaigning for your nominee, and start praying for God’s nominee. Now I know what you might be thinking, “well, Brother Krist, the guy I’m voting for is the most Christian out of them all. It’s clear.”

There was a great man of God, who years ago, spoke by the Spirit of God and told those in attendance at a meeting that sometimes God can use a nonbeliever more than He can use a Christian – that sometimes a Christian won’t cooperate with Him as a nonbeliever will. Again, we do not know the heart of men. God does. Our vote, our rooting, and our campaigning, should come only after we have prayerfully considered all the nominees and asked the Lord who He has selected. Then, by all means – campaign, root, and pull for that person.

So I encourage you, pray for God’s nominee, His next President to be revealed to you. And until then, pray for that person. It’s simple. It only takes a little bit of your time each day. And it means the future of our nation.

Below is a prayer that you can pray, adapt, and make your own to pray out the will of God and for our next President. Thank you for your willingness to pray and God bless you.

Lord Father, I come to you in the name of Jesus and ask you to show me who you have selected to be the next President of the United States. As your Word says in James 1:5, If any one lack wisdom, let him ask you, who gives to all men generously, and it shall be given him. So I ask you God, in faith, show me who you have selected so I can pray for them and do my part in the spirit and in the natural. Until then, I ask you to give them favor with the people of this nation, those in the media, other politicians and donors. Surround them with Godly counsel and give them wisdom of what to do, where to go, and what to say and not say. Lead them according to your Holy Spirit. I declare that according to Isaiah 54:17 that no weapon formed against them shall prosper and every tongue that rises against them in judgement shall be cast down. God, I ask you to give them divine connections, and experiences with the Holy Ghost, and that they continually rely on you and no man, no talent, to guide them. In Jesus name I pray. Amen.