During these pandemic times, I have watched as regulations are initiated through businesses across my city. I’ve noticed that in five particular nationwide businesses, they all have signs that read “Masks must be worn” before entering the building. On every door, before you walk through it, there is a sign. At some, there is a person standing there to count people, to welcome them, to ask them politely a question, “would you like a mask?” 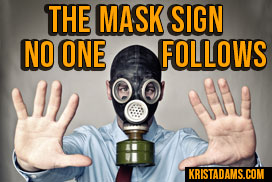 I have watched as maskless people walk through the door at a restaurant with a sign that says “masks must be worn” and no one does anything. At a grocery store, I’ve watched as maskless individuals walk through the door – with a “masks must be worn” sign on it – and no one says anything. Sometimes, they are asked if they would like a mask. If the person refuses, they keep walking and the door attendant does nothing.

I’ve been to a hardware store with “masks must be worn” signs on the door, and “please wear your mask” signs posted all throughout, yet no one says anything to the maskless individuals. At another store, people are greeted with a….well, I’d say warm face, but the face is covered in a mask, so perhaps they are warm. But the individual there as well says nothing as maskless individuals walk through the door, past the giant banner that reads “masks must be worn.”

This has been my observation at five different nationwide stores. I had a different experience at another nationwide store though. As my son and I were walking into a store, we passed by a sign on the door that read “masks must be worn,” which I did not see because the door had 5 other flyers posted on it. As we entered, a person from behind the counter called out to us, “Excuse me, you have to have a mask on if you’re in the store. Thanks.” They weren’t rude. They weren’t necessarily polite. They were just stating the policy of the store.

Here’s the difference – though they all had the same policy, only one business was enforcing the policy, and that’s the only business where everyone that entered obeyed the policy.

Let’s go beyond masks. Across the nation, there have been uprisings, riots, destruction of property and death due to people who have found that they are not held accountable for their actions. In cities across the nation people burn down and tear up property and attack people with government officers and law enforcement officials standing by doing nothing. These people are breaking the law that is on the books, yet nothing is happening. The same thing that others have been arrested for over here, people are getting away with free as can be over there. And it’s illegal in both places.

None of this is about masks or being forced to wear one or freedom not to wear one. It is about laws being enforced and not enforced. This is about what Christians have let the devil get away with. The riots and destruction and freedom to break the law going on in our nation is the fault of the church. Don’t stop reading. It’s not the Democrats fault. It’s not the Republicans fault. It’s not Trump or Pelosi or Fauci or China or Biden or this governor or that mayor. It’s the church. It’s our fault.

1 Timothy 2:1-4
Therefore I exhort first of all that supplications, prayers, intercessions, and giving of thanks be made for all men, for kings and all who are in authority, that we may lead a quiet and peaceable life in all godliness and reverence. For this is good and acceptable in the sight of God our Savior, who desires all men to be saved and to come to the knowledge of the truth.

The Lord told the church to pray for our leaders so we can live a QUIET, PEACEABLE LIFE IN ALL GODLINESS AND REVERENCE. Are we living that kind of life? No! Unless you consider quarantined in your home with people outside burning it down quiet, peaceable in all godliness and reverence. I don’t think you do.

The problem we have is that Christians have been given authority by the Lord Jesus Christ to rule their nation in the throne room of God Almighty and they’ve thrown that away for social clubs, pleasures of the flesh, Netflix, and all sorts of other ‘more important’ things. This isn’t a condemnation. It’s a wake up call.

The church has been given power and authority and in times past we have used it. Today though, we’re sitting up like fat rats doing nothing and enjoying our cheese. The Christian life is not a life of flowery bed of ease alone. Oh yes, there are times when it is a flowery bed of ease, especially when the world is running around like a chicken with their head cut off and you’re sitting their in peace because the Lord has covered you under His wing, giving you peace that goes beyond human understanding.

The Christian life is a work life. It’s work. There are things that need to be done. The church has gotten good at promoting the church, the Christian, the needs and desire of the church and the Christian. But we’ve forgotten that is not our job. We are to be promoting the Lord and His needs and desires. His desire is that we stand up, kneel down and take authority over the principalities, the powers, the rulers of the darkness of this age, the spiritual hosts of wickedness in the heavenly places (Ephesians 6:12). We’re supposed to be taking authority over the devil, his minions and their plans – not letting them run wild across our nations.

But just like the guy at the door of the store, we have a big sign that says “The devil is defeated and His plans cannot prosper,” and the devil walks in (without a mask) acting all victorious with his plans prospering everywhere he goes. The plans of the devil will prosper everywhere a Christian who doesn’t know and use their authority is. It doesn’t matter if there’s a sign up, a policy in place, if you’re not going to enforce it.

It doesn’t matter if there’s a law that says people are not allowed to burn down and tear up another person’s property, beat them up, kill them, attack them – if no one is going to enforce that law. You know that. There’s a reason you go 5, 10 miles over the speed limit. It’s because a cop hasn’t pulled you over. Just wait until that cop sits around the bend in the road day after day. You’ll start to pay attention to that speed limit sign because someone is enforcing that law.

Jesus has already given us authority over the powers of darkness. The authority that was given to Him resides in us through His name.

Matthew 28:18-20
And Jesus came and spoke to them, saying, “All authority has been given to Me in heaven and on earth. Go therefore and make disciples of all the nations, baptizing them in the name of the Father and of the Son and of the Holy Spirit, teaching them to observe all things that I have commanded you; and lo, I am with you always, even to the end of the age.” Amen.

He is the head, we are the body. The body doesn’t have authority that the arm doesn’t, that the foot doesn’t. It’s all the same. Jesus said all authority was given to Him and then He told all of us (not just the disciples) to Go. Why? Because the authority that He had was going with us in His name. But just because that authority goes with us doesn’t mean anything is going to happen. We have to use that authority.

Church, we must use the authority that we have been given or else the devil is going to run right over us. And then we’re going to be held accountable. You’d hold a police officer accountable for just standing there watching a crime taking place without doing something, wouldn’t you? Of course you would. At the least, he’d get fired. What do you think the Father is going to do when we get to Heaven and we haven’t done anything with the authority that He’s given us?

We have the authority. The law is already on the books. Let’s enforce it in the name of Jesus.