Have you heard the sad news of the 103 year old who was barred from attending the church that she had been attending since she was 11? It is a sad story, with lessons we can all learn. She and the pastor had some kind of disagreement and she was barred from the church, just to have recently been allowed to return. 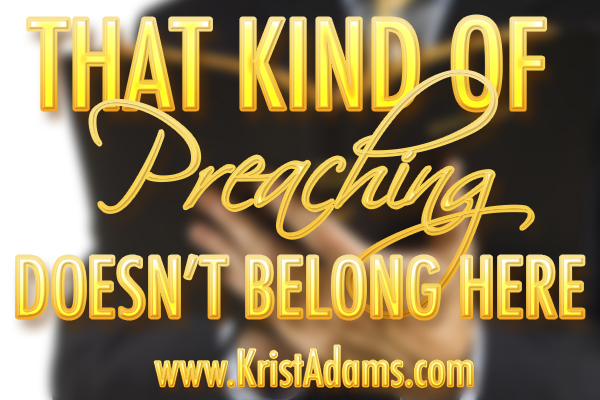 It’s sad with all the stupid stories that make national news that the few involving Christians or a church are ones where Christians are fighting themselves. The Bible says that the world will know us by our love. Sadly, they are knowing us by our feuds and faults.

That’s the first lesson we can learn from this situation. First, we should always walk in love. We never know who is watching us, and even if the only one watching is God Himself, we should still walk in love. Not walking in love – choosing to hold grudges, holding on to unforgiveness, will not only cause us to sin, it could downright kill you. So that’s the first lesson we can learn.

If you’ve read this story, you’d see that this 103 woman made a quite startling statement. The woman and the pastor “sparred over [the pastor’s] preaching style, which she characterizes as a ‘Holiness style’ that she claims doesn’t belong in the Baptist church.”

Here’s a major problem that comes up in churches and the lives of Christian more than ought to. This dear precious woman, as nice as she may be (or not be) is totally in the wrong. I don’t care if she is 103, 23, or 203.

Too often we think that church shouldn’t be this way or that way. Things should happen that way.  That’s the problem that comes up in churches and Christian’s lives – we think things should be this way or that way. Things should be happening this way, not that. The pastor shouldn’t be doing things like this. Here’s a news flash – the pastor is God’s leader in the church. He’s the one that God has given authority to in that church, if you don’t like the way he is preaching, then the problem is you. You either need to get over yourself, or go take it up with the Lord. You sure don’t go and cause some media sensation that gets the whole country, all of Facebook, talking about how stupid these Christians are.

Of course that issue only arises when God is allowed to install the pastor of the church. In this news article, it says that this darling saint and a handful of other members are now responsible for electing a new pastor. Now, this could be deceiving, but if it is up to these members to elect who they want to be pastor – there’s your problem to begin with.

God is the one who sets people into ministry positions – not man. God is the one who calls men and women into the ministry, not man. He’s the one that equips them, not man. Now it is understandable if these members will ‘elect’ a new pastor by praying a new one in and seeing who God has for them.

However, if this is the case of how it works, then they just ran off the last pastor God sent to them. How can they even think that God would bless them or their church when all they want is a ‘bless me club.’ All they want is someone that will make them feel comfortable, that they like. They want a pastor that will do things their way, even if that means disobeying God.

Today’s youth are called the entitlement generation. And that attitude has rubbed off onto other generations. We have people today that think they are due everything – that things should be their way. I hate to tell you, God isn’t Burger King. You don’t get it your way. You don’t do it your way. It’s God’s way or no way. That idea that things need to fit me, be to my liking, the way I want it, entertain me – that’s killing people in the church. This whole way of thinking and believing of ‘if I don’t like it, it doesn’t belong in the church, it’s not my God” is trying to destroy the church. And it’s all a pack of lies being sold to the church by Satan.

No. God has a plan, a set way of doing things and if you don’t like it, He’s not going to show up. Sadly, this whole congregation that this woman attends has bowed down to her because she has been there for so long. It doesn’t matter how long you’ve been there. That church doesn’t belong to her. It belongs to God. But the saddest part is that they have basically kicked the pastor out, but it’s clear that they kicked God out a long time ago.

Oh yes, they’ll preach Jesus Christ, but only if it tingles their years – only if it “belongs in the Baptist church.” Forget the Baptist church! Forget the the Assemblies of God! Forget the Methodists! God bless the Baptist, the Assemblies of God and the Methodist. But it’s not about the Baptist. It’s not about one denomination of another. It’s about God. If that pastor was preaching the Bible, just because you don’t like the way he preaches because it’s a little too “holiness” style preaching, you need to get over yourself. That pastor is doing exactly what he is supposed to do.

Both William Seymour and Charles Parham were mighty men of God used to bring revival to the nation during the early 1900’s. Both were involved with the Azusa Street Revival, both were instrumental in bringing a renewal of praying in the spirit to the nation, and both were locked out of churches because of it.

It is sad that this church, any church, is dominated and controlled by the sheep and not the Great Shepherd. That is not the way God intended it to be and He will not put His full blessing on anything like that. God only inhabits what He designs. If He didn’t design it, you won’t get His blessing on it.

I remember a pastor relaying a story to me one time about a preacher that had been given a new pastorate at a church. This was back in the 40’s or 50’s when racism was more prolific than it is today. Well, this new pastor was given the job before anyone had seen him. The first time anyone met him was when he came in to preach that first Sunday morning. Well, he came in and preached a good message, and shocked everyone – not because it was a good message or a bad one, but because he was black. That night he came back for the night service only to find a lock on the door and a sign that said service cancelled. Well, he knew it was because of him.

That’s sad but true. I’m not trying to put down these people. God loves them. I love them. But too many people are making the same mistakes they are and need to be told before the choices they make leads down a road that they can’t come back from. I urge you – who cares what you think, what your flesh wants, what your denomination says – what does God say? What does the Bible say? Stay with that.

Previous Post: « What You Didn’t Hear In The Debate
Next Post: Those Ghosts You Keep Hunting On TV Aren’t Ghosts At All »