With the invention of the internet came the wonderful ability to reach across time and space and preach the Gospel to those who physically can’t be at the location where the message is being given at that time and place. We now have the ability to reach those all the way around the world with the life changing message. People who can’t get to church, for one reason or another, can sit behind their computer screen, and hear the Gospel message, just as if they were there at church. Those who are too sick to leave their home can hear the same message that those who attend church can. 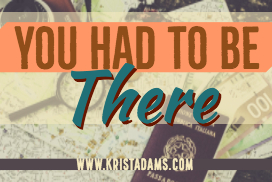 Unfortunately, with all things, there are pros and cons. I’ve mentioned the pros above – and how wonderful they are. But there are some cons as well. There are drawbacks to having those streaming services. Unfortunately, there are always people that will try to “take the easy way out.” There will always be people that try to do as little as possible to get by, and sadly, that comes to church as well. With the dawning of streaming services, some people think that they can sit at home in their PJs and watch church and that means they went to church. They had their ‘spiritual fix’ for the week, so they’re good.

No. That’s not how it works. Sitting at home watching a church service may let you hear the Word of God, but that doesn’t mean it’s the same as going to church.  There is an attitude that goes along with going to church – that you’re going to the place of worship, the place of God. It’s a reverential attitude that prepares a person for what God wants to do for them. It’s rare that the same attitude is carried over to one sitting behind a computer screen, especially if they’re sitting in their PJs.

Hebrews 10:25 says, “And let us not neglect our meeting together, as some people do, but encourage one another, especially now that the day of his return is drawing near. (NLT)”

We are not to take the easy way out, just sitting at home so we don’t have to socialize, talk to that one person who gets on our nerves, volunteer, sit quiet without playing whatever trending game is this week – so we can hear the Word in our underoos. No. We are to actually be present in the same physical building as the minister. It’s not just because we’re supposed to be social with like-minded believers. There’s more to it than that. Take a look at Luke 5:

On one of the days while Jesus was teaching, some proud religious law-keepers and teachers of the Law were sitting by Him. They had come from every town in the countries of Galilee and Judea and from Jerusalem. The power of the Lord was there to heal them. Some men took a man who was not able to move his body to Jesus. He was carried on a bed. They looked for a way to take the man into the house where Jesus was. But they could not find a way to take him in because of so many people. They made a hole in the roof over where Jesus stood. Then they let the bed with the sick man on it down before Jesus. When Jesus saw their faith, He said to the man, “Friend, your sins are forgiven.”…He said to the man who could not move his body, “I say to you, get up. Take your bed and go to your home.” At once the sick man got up in front of them. He took his bed and went to his home thanking God (Luke 5:17-20, 24-25).

There is something about the anointing where you actually have to be present to receive. There are occurrences where people have been healed, saved, set free while listening to recordings, streaming services – sitting in their homes or halfway across the world. But there is such a thing as the corporate anointing. Yes, you can receive from God where you are, but that’s not easiest way by far.
The corporate anointing – with the faith of all those in attendance – multiplies whatever faith you have in yourself. The prayer of a corporate body can multiply the prayer of one person so that something that would take months for one person to accomplish in prayer, would take a few minutes through the prayer of the body.

There’s just something about being there.

“Is any sick among you? let him call for the elders of the church; and let them pray over him, anointing him with oil in the name of the Lord: And the prayer of faith shall save the sick” – James 5:14-15
This prayer in James illustrates something else about physically being present. How can the elders pray and anoint someone unless they are physically present with the one needing prayer? They can’t.
If you look at all the times Jesus healed people, many of those times, the healing was a result of laying on hands. In fact, the Bible says that Christians will lay hands in the sick and they shall recover. Again, how can you lay hands on someone who isn’t present? You can’t. There is something about being physically present where the ministering is taking place.

Yes, we can hear the Word of God preached on CD, tape, video, digital download, live streaming, and several other ways; but nothing beats being physically present where the ministering is taking place. That something is the anointing of God. You may have heard of great moves of God happening at this meeting or that meeting, but you don’t often hear about great moves of God happening to someone sitting at home behind their computer screen.