As we all sit at home, go about our daily lives in a way that none of us have ever known, the thought might have crossed someone’s mind as to how in the world did this happen? And of course when that comes, we find someone to blame. We blame China, or the world leaders, or someone who didn’t prepare us for this. We blame someone who got sick, didn’t wash their hands, didn’t stay six feet apart, didn’t flatten the curve, or anyone else that we can shift blame onto. But in truth, the only group of people that is responsible for this happening is the church.

Christians are to blame for this happening. 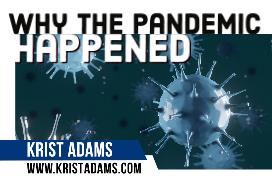 Now that may not be a sermon that you preach on Sunday morning, but it would be the truth nevertheless. Don’t tune me out.

The truth of the matter is that we are in the condition we are in because of the state of the church throughout the world. Because Christians have failed to do what God told us to do, we have the epidemic going on today.

if My people who are called by My name will humble themselves, and pray and seek My face, and turn from their wicked ways, then I will hear from heaven, and will forgive their sin and heal their land. – 2 Chronicles 7:14

Now this is Old Testament, but that doesn’t mean we can’t learn something from it. We can. If we read that scripture, there is a correlation between things going on in the land and the condition of God’s people’s relationship with Him. The Lord tells Israel that He would heal their land if they would 1.) humble themselves, 2.) pray and seek His face, 3.) turn from their wicked ways.

Now I’m speaking about the universal church, not a specific church or denomination. Let me ask you, has the church humbled itself before God, or do they think they can do church without the Lord. Just because you have fancy lights, strobing across the room, lasers and smoke, cute little graphics scrolling across screens, a ‘five-points and a poem’ message that fits the guidelines of an extended Ted Talk – that doesn’t mean you have church. Just because you have more people than ever on your livestream, that doesn’t mean you have church. I saw a church just the other day still using stage lights for their outside service in broad daylight! What are you focusing on – Jesus or some stupid lights? Today, the church thinks it can do church without the Lord. That’s the flat truth.

That brings us to number two – pray and seek His face. Do we still pray and ask the Lord what to do, what to preach, what to worship Him with and to? Do you regulate what we are doing and saying by what the Word of God says, or what is going on in church culture, the world, and popular radio? Have we asked God – what do you want me to do? Not just in church, but in our individual lives? Are we led by the Spirit of God (Romans 8:14) or are we saying that we didn’t even know there was a spirit (Acts 19:2).

And in doing all this stuff (and more), we have gotten away from the consecration and dedication that used to be so abundant in the church years ago. That’s why they had the power. That’s why it was on full display. We have gotten to the place where buddying up to the world is no problem. I’ve heard ministers talk about what is on their Netflix queue and it’s disgusting. These are ministers – church leaders – and they’re watching the same junk a godless heathen watches. They’re ingesting things that no child of God should be filling themself up with. We have to get this junk out of our life. I’m not condemning. It’s not a judgement. It’s a full blown FACT! We got to get back to consecrating and dedicating every area of our lives to God. But the greatest days of the church are still ahead. Don’t fear.

Part of that wicked ways is the lack of doing what we were told to do. That’s why we’re in the condition we are in. We haven’t obeyed the Lord.

For we do not wrestle against flesh and blood, but against principalities, against powers, against the rulers of the darkness of this age, against spiritual hosts of wickedness in the heavenly places. – Ephesians 6:12

You notice that we do wrestle. We wrestle against principalities, against powers, against the rulers of the darkness of this age – that’s demonic forces. We’re in a battle with the devil and his minions. And they aren’t tiny cute yellow ones.

We’re told that we wrestle against these things. The thing is – we’ve been given the authority to deal with them.

And Jesus came and spoke to them, saying, “All authority has been given to Me in heaven and on earth. Go therefore… – Matthew 28:18-19a

And these signs will follow those who believe: In My name they will cast out demons; they will speak with new tongues; they will take up serpents; and if they drink anything deadly, it will by no means hurt them; they will lay hands on the sick, and they will recover.” – Mark 16:17-18

which He worked in Christ when He raised Him from the dead and seated Him at His right hand in the heavenly places, far above all principality and power and might and dominion, and every name that is named, not only in this age but also in that which is to come. – Ephesians 1:20-21

Are we seated with Christ in Heavenly places or not? Yes, we are! Are we the body of Christ and is He the head? Yes! Your head doesn’t have something that your body doesn’t. If you’re a police officer, that badge and the authority that’s behind it isn’t reserved just for your head. Your body has it. All of you. Just like Christ – the body and the head. We all have authority over demonic powers – in the name of Jesus!

That’s why we are told in 1 Timothy 2:1-4, “Therefore I exhort first of all that supplications, prayers, intercessions, and giving of thanks be made for all men, for kings and all who are in authority, that we may lead a quiet and peaceable life in all godliness and reverence. For this is good and acceptable in the sight of God our Savior, who desires all men to be saved and to come to the knowledge of the truth.”

We’re the ones told to pray. But you know what, how often do we see the church praying for our leaders? When the President calls for a national day of prayer? See You At The Pole? Election time? When times get really tough? How about we do what we’re told to do and pray for them first of all. And this isn’t just for our leaders, but all men and for all in authority. We’re supposed to be praying. Jesus said that His Father’s house, His house – the church – is supposed to be a house of prayer.

Have we been doing some binding and loosing? Have we been taking our authority? Are we holding back the evil in the earth? We can. We’re told to.

“And in that day you will ask Me nothing. Most assuredly, I say to you, whatever you ask the Father in My name He will give you. Until now you have asked nothing in My name. Ask, and you will receive, that your joy may be full. – John 16:23-24

We’re told to use the name of Jesus. We’re told to abide in Him. Live in Him. Dwell in Him. And we will ask what we want, and it will be given to us. We’re told to have such a relationship with God that He tells us what is going on, what is going to happen, and what to do about it. But we haven’t done that. We’ve gotten caught up in our own lives. We’ve gotten caught up in the things of the world. That isn’t a condemnation. It’s a reality check. Let’s get our lives right.

Matthew 5:13-14 tells us that we are the salt and the light. “You are the salt of the earth; but if the salt loses its flavor, how shall it be seasoned? It is then good for nothing but to be thrown out and trampled underfoot by men. “You are the light of the world. A city that is set on a hill cannot be hidden.” We’re supposed to be stopping all this garbage from coming. Is it going to come one day? Yes. But not while the church is here, standing in their authority and using it in the name of Jesus.

Previous Post: « Is God Really Fighting For You?
Next Post: What The World Says, What The Word Says »