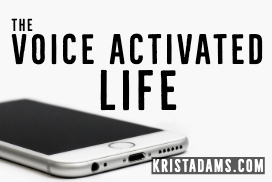 We can tell them to play music, order groceries, or make notes and reminders, among other things. However, there’s something else that’s voice-activated that came along years ago before Alex, Siri, Cortana, and all these other gizmos and technological wonders were ever thought of – life.

The Word of God is voice activated. The blessing of God that were provided through Jesus’ death, burial, and resurrection – they’re voice activated. Yes, the blessings of God require obedience and faith, but they are activated by what you say. Mark 11:23 says, “For assuredly, I say to you, whoever says to this mountain, ‘Be removed and be cast into the sea,’ and does not doubt in his heart, but believes that those things he says will be done, he will have whatever he says.”

Do you see how many times the word say is used in that scripture? Three times! How many times is the word believe used? Only once. We get so focused on the believing part, we leave out the saying part. We have to do three times more saying than believing to get our prayers answered, to get the promises of God to work in our life.

Hebrews 10:23 says, “Let us hold fast the confession of our hope without wavering, for He who promised is faithful.” Hold fast means to keep doing it, don’t stop. The KJV says “profession of our faith.” We’re supposed to keep saying what we believe so it will come to pass. If we’re believing for healing, we need to get the Word of God in our heart for healing and keep those promises coming out of our mouth. It’s the same for any other promise of God.

The Bible has a lot to say about your words. Proverbs 18:20-21 says, “Wise words satisfy like a good meal; the right words bring satisfaction. The tongue can bring death or life; those who love to talk will reap the consequences.”

Proverbs 13:2-3
A man shall eat well by the fruit of his mouth, But the soul of the unfaithful feeds on violence. He who guards his mouth preserves his life, But he who opens wide his lips shall have destruction.

Proverbs 12:14
A man will be satisfied with good by the fruit of his mouth, And the recompense of a man’s hands will be rendered to him.

Matthew 12:37
The words you say will either acquit you or condemn you.”

James 3:3-6
We can make a large horse go wherever we want by means of a small bit in its mouth. And a small rudder makes a huge ship turn wherever the pilot chooses to go, even though the winds are strong. In the same way, the tongue is a small thing that makes grand speeches. But a tiny spark can set a great forest on fire. And among all the parts of the body, the tongue is a flame of fire. It is a whole world of wickedness, corrupting your entire body. It can set your whole life on fire, for it is set on fire by hell itself.

That’s just the beginning. You form your world, your reality, by the words of your mouth. If you want your situation to change, then change your words. There are millions of people walking around in trouble, in poverty, sick, with all sorts of trouble wondering why and how it’s happening to them and the answer is right below their nose. They’ve gotten in the junk and stayed in the junk because of their words.

If you want to change your world, change your confession. Stay with the Word of God and the Spirit of God.