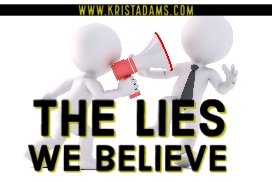 Now I’m choosing lying because it’s so simple. I could have chosen a lot worse, but I’m trying to be nice. But what would happen? What would people think? What would you think?

Your life would be ruined probably, at least at work or school. And the thing is, none of it had to be the truth. All of it could be lies. But here’s the thing, I told those lies over and over and over – day after day. Eventually that’s going to do something.

If you follow politics at all, you’d know how much hate President Trump gets. Some of that may be deserved. But one thing that is constantly in the news is that he is a racist and a white supremacist. I have never seen one fact to back any of that up. I have seen the opposite though. I’ve seen him take pictures with people of all colors. The statistics for African Americans and Latinos on unemployment show that he (or someone) has been working to get those numbers to the lowest point ever. Basically, there’s no hard evidence that he is racists. And yet, day after day, news story after news story, tweet after tweet, someone is calling him a racist.

There’s a reason for that though. It’s called politics and it’s called hate. People hate him because he stands against what they stand for. So the best way to try and ruin him is to get others to hate him, even if they hate him based on a lie. And that’s what many people have done. It’s evident when you talk to a lot of people that don’t like him. They don’t know why they don’t like him really or they don’t like him for reasons that they have no grounds for. Basically, they’ve believed a lie that has no evidence.

You see, if you tell a lie long enough, people will start to believe it, even if it is a lie. Or if you mix a little bit of truth with it and keep saying it – even better. Let’s take this one step further though.

That’s you taking the thought as your own – speaking it. That’s what the Bible says.

…casting down arguments and every high thing that exalts itself against the knowledge of God, bringing every thought into captivity to the obedience of Christ… (2 Corinthians 10:5)

Those ‘arguments’ and ‘high thing’ that are exalting themselves against the knowledge of God – one of those those that’s included is thoughts. We are to cast down every thought that comes against the knowledge (or Word) of God. If it’s contrary to what the Bible says, it’s from the devil. You take authority over those thoughts by rebuking them in Jesus’ name and then you confess what the Lord says about you. If the devil keeps calling you a sinner, every time he does, you just say, “I rebuke you in Jesus name. That’s not the truth. I am the righteousness of God in Christ Jesus. I’m redeemed. I’m holy. I’m set apart. I’m God’s beloved son. God loves me.” You say exactly what the Word of God says. If you keep doing that every time those thoughts come, they’re going to stop coming (it may take some time though). Not only that. You’re going to build yourself up in your faith because you’re speaking the Word of God out of your mouth.

Use your authority. Use your faith. Use your words. Don’t believe those lies no matter how often they come. Believe the Word of God. Believe what God says about you and you’ll be a success in all you do.