After the Lord revealed to Dr. Kenneth E Hagin an attack the devil was wanting to bring against America, He told him, “You saw the same thing in 1970. I told you then exactly what they were, but you didn’t do what you should have done about it. I told you back in 1970 to pray for the leaders of the nation. What happened [Watergate and so forth] isn’t all the fault of the man who was then President. I am going to hold the Christians of this nation responsible. You are the ones who allowed what happened to your nation. If you had prayed, it never would have happened. I showed you what was about to happen. Go back and check….”

Jesus reiterated, “Yes, I am holding you and the Church responsible.”

You may not believe that. You may laugh that off or say he was crazy, Jesus didn’t say that, or any sort of other things. In fact, Jesus said many people would laugh it off. But He also said, “But when they stand before my judgment seat and they receive the condemnation rather than the man who was then President, they won’t laugh. If Christians had done what I told them to do in the Bible -if they had prayed for the leaders of their nation, they would have kept the evil spirits from operating.” 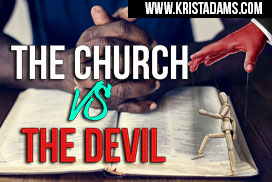 So are these statements accurate? Even if you wouldn’t believe that Jesus spoke to someone, do the words that are stated agree with the Bible? To answer that question, you’d have to know what the Bible says.

1 Timothy 2:1-4 NKJV
Therefore I exhort first of all that supplications, prayers, intercessions, and giving of thanks be made for all men, for kings and all who are in authority, that we may lead a quiet and peaceable life in all godliness and reverence. For this is good and acceptable in the sight of God our Savior, who desires all men to be saved and to come to the knowledge of the truth.

These two verses alone agree with what was stated above. Oh yes, there are more verses in the Bible, but for now, these will suffice. Just looking at these two verses, we can understand that 1.) Jesus was not lying when He spoke to Dr. Hagin (or at least what is stated above agrees with the Word) and 2.) the fight that is happening in our nation right now is between the devil and the church.

This is not a fight between Democrats and Republicans. It is a battle between the devil and the church. The devil is the one that is behind the corruption and fraud going on currently. He comes only to kill, steal, and destroy (John 10:10). He has come to steal this election from truth, kill those that stand in his way, and destroy this nation. Those he has influenced and use would fight you if you told them they were being used by the devil. But that is the truth. “For we do not wrestle against flesh and blood, but against principalities, against powers, against the rulers of the darkness of this age, against spiritual hosts of wickedness in the heavenly places. (Ephesians 6:12 NKJV)”

The fight we are in is a spiritual battle. Sadly, many Christian don’t believe this. Some are even pulling for the devil. Others just sit on the sidelines, letting the devil take over. But they will receive the condemnation for allowing the devil to interfere in this nation. Many Christians think all is fine, that we won’t have to answer for anything we do in this world, because Jesus paid the price. That’s not true though. That’s only partially true. Jesus paid for your sins, but we still have to stand before the Judgment Seat of Christ. “For we must all appear before the judgment seat of Christ, that each one may receive the things done in the body, according to what he has done, whether good or bad (2 Corinthians 5:10 NKJV).”

The problem that we have is that we haven’t done that. Christians are notorious for praying for our leaders every 2 or 4 years. We pray for them when crisis arises. But do we pray for them 3 years from an election or when nothing is physically evident and wrong? Usually, no. We assume all is well and disobey the commandment of the Lord. We are told to pray FIRST OF ALL for our leaders (Kings – presidents today, and all those in positions of authority). But look what is says – FIRST OF ALL. That means before you pray for yourself, your children, your family, your friends, your surroundings – before all of them, you pray for your leaders – from the top level to the bottom level, from Federal government to local government.

Why are we to do this? “…that we may lead a quiet and peaceable life..” Did you know that America used to, I’m not sure about now, but used to send out 90% of the missionaries to the world. That means if the devil can cause disturbances in our nation, war, a leader that is unfriendly – even hostile to the body of Christ – then he can stop the majority of the Gospel going forth into the world. If you just look at what will be instituted next year, as we currently stand, it’s clear that things will not get better in this nation.

We must understand, as the church, we have the authority and the responsibility to pray for our nation and our leaders. If we don’t, we will be held responsible for what happens in this nation and to our leaders. Jesus said so. That’s just.

Don’t stand around waiting to see what happens. Step in, kneel down, grab hold of the horns of the altar, use your authority and change the course of the nation that the devil has tried to set. Stay with the Word and the Spirit.