I was skimming through the radio the other day, and my attention was caught on this secular radio station with these people talking. One of the DJs was saying that he thought it was brave for a person to go out and eat by themselves at a restaurant on Friday or Saturday night after 8 o’clock. He said he thought it was brave because there would be so many people staring at you. 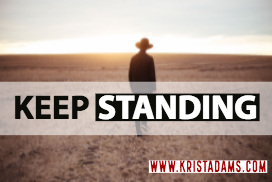 This is what this guy’s idea of being brave was. Now of course some of the other DJs thought he was being silly. However, if he has this opinion, you can bet that others have this opinion. So it is safe to say that for part of the world, this is their idea of being brave – sitting alone at a table on the weekend after a certain time, having people stare at you. I’m sure there’s not too many that think this way though.

As a Christian, this isn’t an idea or concept of being brave. Being brave is standing up for yourself, standing up for the truth, standing up for being a Christian, especially when the only other person standing with you is God Himself. Imagine what others throughout history felt like. What about the 2 spies from the children of Israel that came back from the Promised Land with a good report? They were mighty brave. They had the other ten spies, and then the entire camp of the children of Israel yelling at them. They had these people of God – all of them – telling them that what they were saying was wrong. The millions of people were shouting them down. But what those 2 spies were saying was what God was saying. They would go on to be the only two to enter the Promised Land from that group.

There was David, who would one day be king of the nation, but before that stood up before the armies of Israel and declared – boldly – that the uncircumcised Philistine Goliath was going to fall. Of course he was saying this when all of the army was cowering in fear before Goliath. That included the king as well! Here you had one little boy – 16 or so – standing up against all of God’s people – boldly declaring the opposite of what everyone else was saying. And everyone else was supposed to be saying what he was saying. But he was alone. However, he was saying the exact same thing God was saying. He would go on to be king.

We have to understand that as Christians, we have to stand up for what we believe in. Sometimes though, the people we stand up to may be the same people that should be standing with us. Sometimes it’s people that just don’t know better, who are being influenced by anything but God. Be encouraged. You’re not the first one to stand in a place like this.

When the Apostles were arrested and let go and told to not preach anymore in the name of Jesus, they went to their own company – people that believed just like them. And at that time, they didn’t cry, wine, or complain – they prayed. Acts 4: 29-30 says, “Now, Lord, look on their threats, and grant to Your servants that with all boldness they may speak Your word, by stretching out Your hand to heal, and that signs and wonders may be done through the name of Your holy Servant Jesus.” They prayed for boldness. They didn’t even pray that the persecution would stop. They prayed for boldness to continue to preach and not only preach, but that the power of God would be in demonstration.

Times will come when you have to stand up for your faith, maybe all by yourself – maybe in front of those who don’t believe, maybe in front of those who should be standing with you – but remember this: God is always with you. The creator of the universe is standing with you, against a bunch of His little creations. If God is with you, who can stand against you? Whoever it is – they won’t be standing for long.

Stand in faith – knowing who you are and who you belong to – ask for that boldness and strength to continue standing. Be brave, be bold, proclaim the truth. And always remember, God is with you.