I continually hear the theme about God moving mountains for people in music. The only problem is the Bible never talks about God moving mountains for us. It talks about us moving them. There’s other songs that talk about God fighting the battle for you. But God isn’t fighting a battle for you. God is already fought the battle and He’s won. If you are saved, born again, alive in Christ, you have won as well. However, it is up to you to enforce that victory. 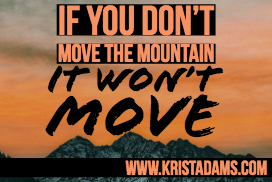 There’s a lot of Christians who think God is fighting their battle for them. There must be a lot of us thinking that because there’s a lot of songs written about it. Now it may sound good to have a God who fights your battles for you. Then you can just sit back and trust Him to do everything. But that’s not how Christianity works. That’s not how God works. The battle has already happened; the war has already been fought, and we have already won. God isn’t fighting our battles for us. He has already fought them for us. That doesn’t mean that those who are defeated are going to act like they are defeated.

After World War II when the Allied forces defeated the Axis Powers, the United States occupied Japan for a time. During that time weapons were removed. Japan was defeated, and the United States was an occupying army, enforcing their defeat. That doesn’t mean that every single Japanese soldier acted defeated. In fact, there was one Japanese soldier that had been on an island in the forest when the war ended. He did not even know the war ended and continued to fight for 20+ more years.

Just because an enemy has been defeated, that does not mean they are going to act like they’re defeated. We have to enforce the victory.

There was a minister waiting to be picked up by a pastor to preach at his church one morning. While waiting in his motel room in the small town, he saw someone run past his room through the window. He looked out quickly and saw two or three more people running passed his window. Then he started to hear police sirens. A few minutes later the pastor picked him up.

When he got in the car, he asked the pastor what was going on. The pastor was amazed that he had not heard the news and so began to tell him what was happening. He said that some guys had robbed a gas station up the road and stole a car. They drove off in the car, past the motel and down the street and crashed into the woods. From there, they ran into the woods fleeing from the police. Police cars and police helicopters were sent out to catch these guys.

“You’re lying to me,“ said the minister. The pastor told the minister that he was not lying, but the visiting minister continue to declare that the pastor was not telling the truth. After a moment or two of going back-and-forth, the minister relayed what the pastor had just said. “You’re telling me that these guys robbed the gas station and stole a car and were running from the police? “

“That’s what I said. Are you deaf? “The pastor said.

You see, just because there is a law that says someone can’t do something, that doesn’t mean they’re not going to do it. Just because there’s a speed limit sign that says 45 mph, that doesn’t mean everyone is going to do 45 mph. That’s why we have police officers, to enforce the laws that are on the books. Without someone enforcing the law, the lawbreaker, that would be the devil, will continue to break the law. That is why you and I have to enforce Satan’s defeat. God has already given us the authority, and the name of Jesus, to enforce his defeat. He’s given us the authority to speak to the mountain. He’s given us the power to deal with those situations. It comes from the name of Jesus, the written word of God, and the power of the Holy Spirit.

But just like anything else, if you only use it every now and then, you’ll have a hard time getting it to work properly. If you try to learn a foreign language, but only study on it once a week, it will take you a very long time to become proficient and speak it fluently. If you try to learn a piece of computer software, but only practice on it once a week, it’s going to take you a long time. If you only pray every now and then, it’s probably not gonna work for you as much as it will for the person that prays every day. If you have not build your faith up to the point where you are confident and unwavering in your belief in the name of Jesus, the Word of God and the power of the Holy Spirit – then it may not work for you like it will for the person has already built themselves up in those things.

Don’t sit back and wait for God to move your mountain. You’ll be waiting a long time. Take the power and the authority that God has already given to you, because the battle has already been won, and enforce the victory that you already have.