Since election season has started, I have seen many of my friends on Facebook and Christians on the web start pulling for their favorite contender for the office of the President of the United States of America. It’s not a bad thing if you have a favorite – as long as you’ve done some research and know what that person really believes and what the other people running believe. You want to know the truth, not something that was spun from a PR agent. But then again, that’s part of the problem. 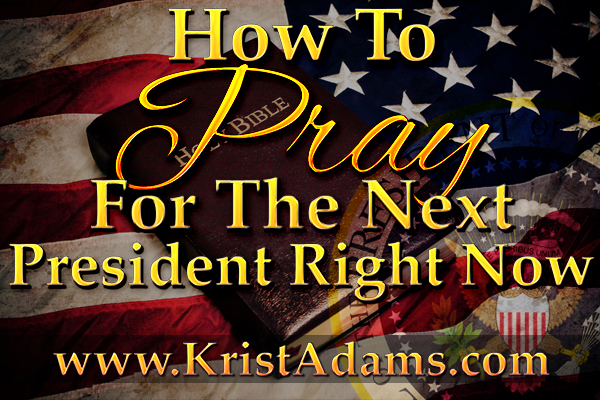 Well the other guys are not very good Christians. They lied in that one answer.

I don’t like the other people’s stance on the economy.

The other guy isn’t even saved.

Now before you stop reading, let me help you understand something. It doesn’t matter what the candidate believes when it comes to the economy. It really doesn’t matter if they’re saved or not. Don’t get me wrong – God doesn’t want us pulling for someone possessed by the devil either.

But we can learn something about who to pull for by studying the scriptures. We may think that we know what’s best – that we have chosen the best candidate – the one that should be President. But that may not be the case as scripture and history have proven.

“Then all the elders of Israel gathered themselves together, and came to Samuel unto Ramah, And said unto him, Behold, thou art old, and thy sons walk not in thy ways: now make us a king to judge us like all the nations. But the thing displeased Samuel, when they said, Give us a king to judge us. And Samuel prayed unto the Lord. And the Lord said unto Samuel, Hearken unto the voice of the people in all that they say unto thee: for they have not rejected thee, but they have rejected me, that I should not reign over them (1 Samuel 8:4-7).”

The Lord told Samuel, “Now therefore hearken unto their voice: howbeit yet protest solemnly unto them, and shew them the manner of the king that shall reign over them (1 Samuel 8:9).”

Now if you go to the scriptures and look at the description of Saul, he seems like he would be a great king. He’d be the man for the job. The best candidate. But he wasn’t. And in fact, God told Samuel to tell the people what they would get since they wanted this king. You can read all about that in 1 Samuel 8. Yes, God had chosen Saul originally. But only because the people wanted a king – not God’s will. He gave them what they wanted, not what was best for them.

Let’s look at another instance where Israel needed a king. In 1 Samuel 16, Samuel once again goes to anoint a king for Israel. Most of us know this story. In verse 6 we see Samuel’s response after being presented the sons of Jesse – “And it came to pass, when they were come, that he looked on Eliab, and said, Surely the Lord‘s anointed is before him.” Samuel – the prophet of God –  looked at the candidates that stood before him and he saw the one that it had to be. He knew that he knew that Eliab was the next leader of Israel. This is the man of God. The one that hears from Heaven – hears the voice of God – and he chose Eliab.

But he was wrong.

He was wrong because even though he was a man of God, the prophet of God – he made a decision based on his thoughts, not the thoughts and will of God.

In verse 7 we see the Lord’s response, though, “But the Lord said unto Samuel, Look not on his countenance, or on the height of his stature; because I have refused him: for the Lord seeth not as man seeth; for man looketh on the outward appearance, but the Lord looketh on the heart.”

Just because someone looks like they have all the qualifications, that they’re the best one for the job – that doesn’t mean anything. Just because they have the right words – that doesn’t mean anything. What we see and hear and then make a decision on for the election of our leader could be totally wrong because what we see and hear could be wrong.

The majority of the candidates running for the office of the ‘leader of the free world’ are not out there to get God’s will to come to pass. They’re out there trying to get elected and if that means spinning things, lying, distorting the truth – many are more than happy to do it.

Let’s look at another scripture. Proverbs 29:2 says, “When the righteous are in authority, the people rejoice: but when the wicked beareth rule, the people mourn.

See Brother Krist, that there proves that we should vote for the Christian guy.

Well, if that’s the case, which one should we vote for? There’s more than one, so how do you choose? Right now on the Republican side, the majority of the people claim to be Christian. You must understand that single scripture alone is not your basis for choosing a new leader. No. You need to keep that scripture in mind, but it’s not the basis of how you vote. I knew of a minister of God, one mightily used of the Lord, beyond reproach and proven to stand in the office that he did.

During an election years ago while a prominent Christian leader was running for an elected office, he stood up and said, by the spirit of God, that sometimes God can use sinners a lot easier than he can use Christians. One of these reasons is because we don’t know what is in the heart of the men running. They could have issues in their past where they have been disobedient to what the Lord wanted to do in their life and thus, aren’t trustworthy to do what God calls them to do when standing in that office. Even if someone is a Christian, we may not know what they believe because they may not make it public, or imagine this – they lie about it. Yes, I know it’s unbelievable that a Christian would lie. But that was the point. We don’t know what is in a person’s heart.

Now I know what you’re thinking. Does that mean that God can use a sinner? That a nation can be blessed in spite of the leader. Yes. It can be! Now, don’t be fooled. The leader of a nation does matter. But the Lord will bless a nation based not on the leader, but the people in the nation praying. Look at the story of Joseph. Even though Egypt was led by a king that worshipped demons, it was still blessed because of Joseph.

Babylon was blessed because of Daniel.  The Jews of the Persian empire were blessed because of Esther, even though they were ruled by a non-Jew. Yes, leaders are important, but at the same time, the Lord will bless a nation because of the prayers of His people.  He will do this so the people can carry out God’s will – to take the Gospel to the nations.

“I exhort therefore, that, first of all, supplications, prayers, intercessions, and giving of thanks, be made for all men; For kings, and for all that are in authority; that we may lead a quiet and peaceable life in all godliness and honesty (1 Timothy 2:1-2).”

We are to pray for our leaders. If we think that just doing some research on candidates for elected office and then voting is doing our part, we are sadly mistaken. Yes, there are natural things we do like vote. However, if these natural things are not preceded by spiritual things – prayer – it might as well be in vain. We saw that in the last two elections. The church (as a whole) decided a few weeks before the actual election date to start praying and by that time it was too late. Not enough was done and the will of the people of the nation, not the will of the church and God won out. The devil already had his claws in our nation and he hasn’t let it go since.

“If any of you lack wisdom, let him ask of God, that giveth to all men liberally, and upbraideth not; and it shall be given him (James 1:5).”

The Bible is clear in what we should do. The problem is that most Christians won’t follow the Bible. Now don’t get me wrong. They’ll follow the Bible in some areas. But when it comes to other areas that may go against what they want to do, that’s a different story. They may have a fight in themselves whether to follow the Word or their own ways. Or they may just follow in their own desires instead of the Word because they haven’t thought about what the Word says. God’s Word and His Spirit are not first place in their lives in that area. This isn’t a condemnation by any means as we all do this in one area of another. It just so happens that this is the area I’m talking about now and many of us fit into it.

It is possible that God will tell you who you should pray for specifically. I know one minister that for the last four elections God has told him who would be President. Of course He only told him days to weeks before the elections. But that minister acted on what God told him, got people together to pray, and in some situations, things were changed in the Spirit realm.

If God doesn’t tell you who is the next President – that’s okay. No big deal. We don’t need to know to pray for them. Be led by the Spirit on how to pray. Ask for wisdom of what to pray for. And continually pray for them – starting now! Don’t wait until it’s a few days before the election in November. Pray now.

I believe one of the reasons the last two elections turned out the way they did is because the church did not do what the Bible says and waited until the last minute to pray. By that time the candidates for the two major parties had already been decided. If the church would have prayed, we could have chosen not only the candidates, but the President himself. But we didn’t. And we are all facing the consequences for it today.

I have been praying that the Lord would strengthen the candidate that He desires to be President. Give them wisdom and favor with all they come in contact with – the media, the people of the nation, other candidates, donors. Surround them with men and women of wisdom, character, and godliness. Give them the words to speak when they need them. Open the doors that need to be opened and close the ones that need to be closed.  I pray that no weapon formed against them shall prosper in the name of Jesus!

Now that is just a small part of what I pray, but that’s a good start. I encourage you…I beg you to begin to pray not for your favorite, but for the one that God desires to be President. We have already seen what happens when men have what they desire – in scripture and in our current time. We don’t need what we think is best. We need what God knows is best. Begin to pray now so that this nation can be turned around. A new leader will not do that. Only God can. But He works through people and it sure helps if the right person is in the highest natural office in the land. Let us pray so that God can restore our nation, so that it can once again become strong at what He intended it to be – a beacon of Hope to send the Gospel to the nations.