If you’re a Christian, pretend for a moment you’re not. Terrible thing, yes, but just pretend you aren’t and wrap your head around this thought:

The government of a nation runs a nation. Politics and politicians run a nation.

Now come back to the land of the living, as a Christian and think on that thought. Most likely, you see nothing wrong with that at all. That’s the problem. As a Christian, according to the Word of God – God Himself – the government is not supposed to run a nation. 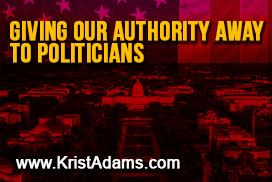 Historically, the way that God intends things to happen, is for the church – His people, the priests (which you are as a Christian – He has made you a king and priest) – the church is to run the nation. When Israel became a nation, the leader was God Himself. But then Israel pushed and pushed and wanted a king to be their leader – so they could be like other nations. Why would you want to be like other nations?

Why wouldn’t you want God as the leader of your nation? Well, many so-called Christians don’t. They want the person they agree with to be the leader, even when their agreeing doesn’t agree with the Bible. When God was ruling the nation of Israel as their King, the ones directly under Him were not politicians, bureaucrats, or kings, dukes, or presidents. It was the priests. It was the church in a sense.

The Bible continually tells us about the importance of our leaders. It tells us to pray for our leaders because we – the Christian, the church – has the power to change them, their heart, their actions, their words. We have the ability to control our nation.

1 Timothy 2:1-4
Therefore I exhort first of all that supplications, prayers, intercessions, and giving of thanks be made for all men, for kings and all who are in authority, that we may lead a quiet and peaceable life in all godliness and reverence. For this is good and acceptable in the sight of God our Savior, who desires all men to be saved and to come to the knowledge of the truth.

2 Chronicles 7:14
if My people who are called by My name will humble themselves, and pray and seek My face, and turn from their wicked ways, then I will hear from heaven, and will forgive their sin and heal their land.

See, the church- you and I – has the ability, authority, power to rule the nation. But because we’ve forgotten it, ignored it, or don’t believe it, or got too busy with other things – we’ve given that authority over to crooked politicians, to elections, to the will of the (lost, carnal, wouldn’t know God if He came walking down the aisle with a red cape on) people.

We haven’t used our authority like we should. We’ve pretended that demon spirits magically don’t exist anymore, even though our Lord has told us they do, what they do, and how to deal with them. We think they just flew away and they don’t get involved in the government, in the church, in people’s lives. We don’t do what the Word says and pray for our leaders. We might once a month, or during election time, but do we do it like the Word says? And we don’t live like we should so our prayers can be effective. You can’t sin all week and come to church and think one prayer will defeat the demons that you’ve cuddled up to all week. You can’t live like the world and think the power of God will move through you like the Word says it does for someone who is living a life of holiness.

Proverbs 21:1 NKJV
The king’s heart is in the hand of the LORD, Like the rivers of water; He turns it wherever He wishes.

The hearts of our leaders are in the hands of the Lord. But just like Abraham asking God to spare Sodom, He will hear us. Like David asking the Lord to spare the kingdom because of his sin, He’ll hear us. Like the church praying for the leaders oppressing them in the New Testament, the Lord will hear us. And He will heal our land. He will turn their hearts. He’s given us the ability to rule our nation, don’t throw that away for anything.