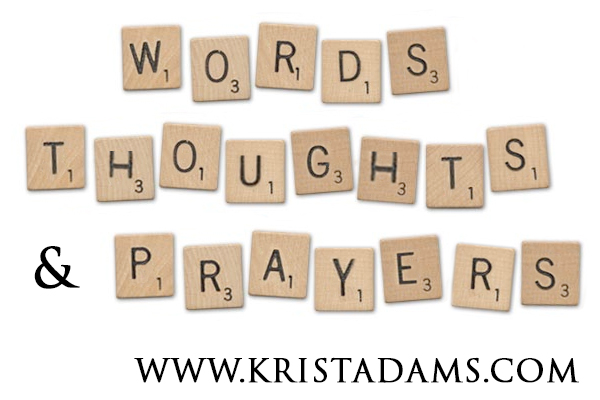 You know what else is powerful? Prayer. My goodness that is an understatement. Do I even need to find scripture to back up that statement? If I do, then you better have just gotten saved. But just to make sure, here’s two scriptures:

Therefore I say unto you, What things soever ye desire, when ye pray, believe that ye receive them, and ye shall have them. – Mark 11:24

And whatsoever ye shall ask in my name, that will I do, that the Father may be glorified in the Son. – John 14:13

Your words will not produce life or death unless they are spoken by you. Perhaps we shouldn’t call them words then, but I’m going to just to make this point. Many people misunderstand the concept of confession. They believe that those who preach or teach on confession are a bunch of lunatics. They call them the ‘blab it and grab it’ bunch. However, if you look at scripture, you’ll see they aren’t crazy, they’re scriptural.

Hebrews 10:23 says, “Let us hold fast the profession of our faith without wavering; (for he is faithful that promised;)…” The word profession there could easily be changed to confession. That’s the meaning of it. The Bible tells us to hold fast to our confession – keep saying it. Don’t say anything contrary to it and don’t do anything contrary to it.

Joshua 1:8 says, “This book of the law shall not depart out of thy mouth; but thou shalt meditate therein day and night, that thou mayest observe to do according to all that is written therein: for then thou shalt make thy way prosperous, and then thou shalt have good success.” The word meditate there means “to mutter.” Just like the previous scripture, it means to confess. But it means to continually confess – to confess over and over. The book of the law (the scripture we have today) shall not depart from your mouth, but you shall continually confess them. Then you’ll have good success. Sounds like you should blab it and grab it.

So your words are only powerful if you speak them. So we should be careful what we speak. Watch over your tongue, what you say, and what you don’t say. Death can come just as much from what you say as to what you don’t say. Confess God’s Word about you being healed, about Jesus taking your infirmities – especially when you’re sick.

So what of your thoughts? They’re powerful too. What else does the Bible say about them?

And be not conformed to this world: but be ye transformed by the renewing of your mind, that ye may prove what is that good, and acceptable, and perfect, will of God. – Romans 12:2

(For the weapons of our warfare are not carnal, but mighty through God to the pulling down of strong holds;) Casting down imaginations, and every high thing that exalteth itself against the knowledge of God, and bringing into captivity every thought to the obedience of Christ; – 2 Corinthians 10:4-5

Your thoughts are so powerful that the Bible tells us that we must renew them to the Word of God. If we don’t, those thoughts will take us down a dark road away from Christ. Now I understand it says ‘mind,’ but that is where the thoughts come from. Our thoughts are so powerful that the weapons of our warfare through Christ casts down imaginations (those are thoughts) and brings every thought into captivity to obedience in Christ [notice we’re the ones that are supposed to do that though]. If our thoughts weren’t powerful, there’d be no need to cast them down or to bring them into obedience to Christ. They’re so powerful, if we set our thoughts on fleshly things, it produces death, but if we set them on spiritual things, it produces life.

Sin begins as a thought. And a thought enacted on dies in the womb. Sin starts as a small thought in your head, trying to get you to do something. But if you bring it into obedience to Christ, if you don’t act on it, that thought will never produce sin. On the opposite side, all great things (naturally speaking) begin as a thought before it is put into action. Notice that thoughts are powerful, but until they create an action, they’re nothing. Guard your heart – guard your thoughts.

I know many well meaning Christians that have prayed for things, never gotten an answer and believed what happened in their circumstance was the will of God. You know, because nothing could be wrong with them and how they prayed (sarcasm intended). What does the Bible say about this?

And in that day ye shall ask me nothing. Verily, verily, I say unto you, Whatsoever ye shall ask the Father in my name, he will give it you. – John 16:23

And this is the confidence that we have in him, that, if we ask any thing according to his will, he heareth us: And if we know that he hear us, whatsoever we ask, we know that we have the petitions that we desired of him. – 1 John 5:14-15

First, we must be praying in the name of Jesus. It is the name of Jesus that we have the authority to have our prayers answered. We must be praying to God the Father, not to Jesus. It’s good to talk to Jesus, but our prayers are directed to God the Father. Jesus came so we could have a relationship with the Father. Secondly, we must have the confidence (or faith), that we’re going to have our prayers answered. Otherwise, we’re just praying shotgun prayers – scattershot prayers. We pray for anything and everything and hope something sticks. It doesn’t work that way. But the most important thing we have to do is have faith. You remember the old saying, “Faith begins where the will of God is known.” That saying is based off of Romans 10:17 – So then faith cometh by hearing, and hearing by the word of God. You can’t have faith for something you don’t know.

That’s why Peter said he didn’t mind repeating himself. When you hear the Word of God and start to get it, you know it. But when you hear it over and over and over, there comes a time when it goes from knowing to revelation. It’s the ‘ah ha’ moment. The light bulb goes off in your head and spirit. And that’s one reason for confession.

Without knowing the Word of God, you’ll pray and believe for the stupidest things. You’ll pray for God to give you that man’s wife that sits on the third pew. You’ll pray for anything and everything that’s not the will of God, and some times the devil will be ‘nice’ enough to answer your prayers instead of God. And you’ll think for a time it’s God because you don’t know the Word.