American Family Association has gotten near, if not over, 750,000 people to boycott Target over their transgender bathroom policy. (They may be closer to a million by now) That’s a lot of people. However, let’s be honest – if the AFA would have instead gotten those 750,000 – nay, a fraction of those, to stop what they’re doing, stop boycotting, stop writing FB posts, stop whatever – and pray according to the Word of God – this thing would be over. Not only would it be over, lives would be changed not because someone forced them by the power of the wallet, but because their hearts were changed by the power of God. 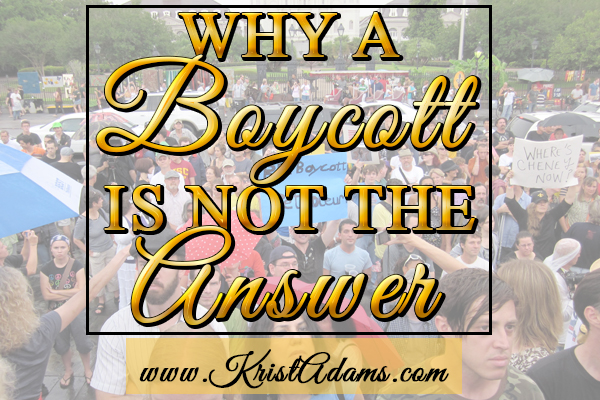 There you go again, pray, pray, pray. Yes. Pray! I understand that a good amount of those people boycotting may not be Christians, but concerned citizens. However, a lot of them are Christians who are supposed to live their life according to the Word of God. What does the Word say? It doesn’t say that we solve out problems by boycotting. I’m not saying boycotting is wrong, but if that’s all you’re doing, whatever you’re doing isn’t going to have much effect, lasting effect.

What does the Bible say anyway? That’s what we, as Christians, are supposed to be living by, aren’t we?

Be careful for nothing; but in every thing by prayer and supplication with thanksgiving let your requests be made known unto God. And the peace of God, which passeth all understanding, shall keep your hearts and minds through Christ Jesus. – Philippians 4:6-7

I exhort therefore, that, first of all, supplications, prayers, intercessions, and giving of thanks, be made for all men; – 1 Timothy 2:1

Now honestly, if I wanted to quote all the scriptures that tell Christians to pray, this would be really long, and you’d be here reading it all day. The fact of the matter is that everything has it root in the realm of the spirit. Everything we see, the problems we deal with – they find their root in the spirit realm, the unseen realm.

Through faith we understand that the worlds were framed by the word of God, so that things which are seen were not made of things which do appear. – Hebrews 11:3

What does that have to do with anything? You can’t solved a spiritual problem by natural means. People, Christians included, are trying and have been trying to solve the natural problems of this world, of this nation by natural means. The problems of this nation are spiritual and you can’t solve them by passing a new law, or electing a new president, or forcing a company to do this or that.

However, if even a fraction of those 750,000 would get on their knees and pray for the leaders or Target, not only would that policy be turned around, but so would a lot of their other policies. So would the lives of those leaders, and the lives of so many others. People would be saved not just from a possible attack by a rapist or molester, but some would be saved from the very pit of Hell.

What does the Bible say?

Then he answered and spake unto me, saying, This is the word of the Lord unto Zerubbabel, saying, Not by might, nor by power, but by my spirit, saith the Lord of hosts.  – Zechariah 4:6

But I say unto you, Love your enemies, bless them that curse you, do good to them that hate you, and pray for them which despitefully use you, and persecute you; -Matthew 5:44

How do you love your enemies? You pray for them! Pray that things would be turned around in the name of Jesus Christ. And once you have prayed according to the Word of God, exercising your faith in the one who created the Heaven and the Earth – stand back and watch things change – not by power, or might, or boycott, but by the Spirit of the Living God.