These were more fair-minded than those in Thessalonica, in that they received the word with all readiness, and searched the Scriptures daily to find out whether these things were so.  – Acts 17:11 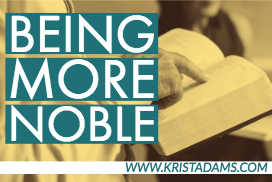 The Apostle Paul said that the believers in Berea were more fair-minded (the KJV says ‘more noble’) because they 1.) received the word with all readiness and 2.) they searched the scriptures daily to find out if what was being preached was true. Today that is almost unheard of. How many Christians will actually take the pastor’s sermon and go home on a Sunday afternoon and look and see if what he said was actually in the Bible? Or maybe even just sometime that week? Oh yes, the Scriptures he used are probably in the Bible, but do they mean what he said they mean? Do we as Christians go and look up the whole chapter that versus is found in? Do we look at it in context? Do we go to verify of what is being taught to us is actually the Word of God or is it the ideas of man?

For the most part, we just sit back and take in what is being said, not questioning whatsoever the pastor’s message. And we think not questioning the pastor’s message is a good thing. We think that it shows trust in the pastor. However, the Apostle Paul said it was a good thing that people question his preaching. Would it be even better if we question our own pastor’s preaching? It’s not a sign of disrespect. It is a sign of being a student of the Word.

It’s not a disservice or mistrust in the pastor, it’s being a good student of the Word. Many people just sit back and take in what is being said from the preacher behind the pulpit. And that would be a good thing if all preachers were infallible and unable to say anything except for the truth. But that’s not true. We have to check up on our leadership. The Bible tells us to so. In fact, if the only Word that we are getting in our lives is from church, then we’re doing a disservice to ourselves. We should be studying the Word of God more than just inside the walls of the church. It should be a daily discipline that we not only read our Bible, but we study it.

I want to give you a few different quotes, from different men so you can see how vast the belief is that we need to have knowledge on the subject at hand. Adolf Hitler, the demonic leader of the Nazi party, said, “What luck for rulers that men do not think.” He knew it was a good thing to remove knowledge from in front of people. He knew that it was easy to manipulate people when they didn’t know what was going on. God doesn’t want you manipulated. God wants you to know the truth. He doesn’t want you to be ignorant of His Word, of who He is, or what He wants to do in your life. That is why He gave us His Word.

Greek historian Thucydides said, “So little pains do the vulgar take in the investigation of truth, accepting readily the first story that comes to hand.” Of course that was in Greek. Paul Woodruff translated as, “…the search for truth strains the patience of most people, who would rather believe the first things that come to hand.” This is so true. People are lazy. Like I just said, most Christians will sit back and just taking what is being said without questioning it at all. How often do they go to their Bibles to search out and see if what is being said is the truth? Usually they will accept it because it is what they have been taught all their life. It agrees with what they have been taught since they were a child. But what if what you have been taught since you were a child is a lie?

Too many prefer to live a lie than take the time and effort to discover the truth. That in part may be because they prefer to be spoon-fed their ‘truth’ than find it for them self.

Winston Churchhill, the great leader of Britain during World War II said, “In wartime, truth is so precious that she should always be attended by a bodyguard of lies.” Truth is of such value that it is always surrounded by lies. We must understand that we are in a war for the truth. The devil is continually trying to feed us lies to lure us away from the truth of God’s Word. Many times he will use half-truths, which many times can be more damaging than lies. Very often we have to fight through lies to find the truth. It takes some effort on our part.

Now the Spirit expressly says that in latter times some will depart from the faith, giving heed to deceiving spirits and doctrines of demons… – 1 Timothy 4:1

I was talking to some Christians a while back and the subject was brought up about a certain topic which is debated in the Christian life. One person said that what was normally accepted as scriptural truth was wrong because such and such taught on this subject and what they said was good. But what does the Bible say? Who cares what preacher said what! What does the Bible say? I repeatedly tell those that I preach to that it doesn’t matter what I say or any other person says, that if it doesn’t agree with the Bible – don’t accept it. It doesn’t matter who it is. And that’s why it is so important to know the Word of God.

I was curious what this preacher said so I went home and found on the internet this teaching. I looked up the scriptures that this person was using to back up their point, and on face value it may look like what they were saying was true. If you take what they said, it appears that they might be right. But after digging through the scriptures, it was evident that the argument that they made had holes in it that they didn’t bother to talk about. They used a certain translation that translated the scripture differently than what the Hebrew says. They used scriptures that weren’t talking about the subject at hand. They said some things, that while many may want to believe them because it makes him feel good and they can do what they want, it didn’t agree with the whole counsel of the Word of God. People may want to believe the Bible says that. But in truth, it doesn’t.

It doesn’t matter what we may want. If the Bible doesn’t say it – the whole ‘counsel of the Word of God,’ not just one or two scriptures, but all of it, then we shouldn’t accept it. I know many people that will willingly accept a small handful of scriptures that have been twisted so they can believe one thing, and yet they dismiss the other 100+ scriptures that say the exact opposite of those twisted scriptures. Like the slogan says, “the truth doesn’t care about your feelings.” That sounds harsh, but it is true.

The truth of the matter is that the only perfect person is Jesus Christ. If the person preaching the Word is not Him, then we should be checking up to make sure that what is being preached agrees with all of God’s Word. It’s not the big thing. Most preaches will preach that Jesus wants you saved, but beyond that, we should be checking up on the person ministering to us. It’s not that we don’t like them. It’s just that they are human and capable of missing it. Just because they were going with God 100% yesterday, that doesn’t mean they are today. It’s a daily thing. And daily we should be in the Word – studying, learning, finding out what it says so that our relationship with our Heavenly Father is defined by us, not a preacher. We shouldn’t have a relationship with God that has to go through any minister. It should go directly to Him.

God bless. Stay with the Word and Spirit.