I won’t say this is new since there’s nothing new under the sun. In fact, with it being over half a century old, I’m sure this has been said before. But with the rise of everyone finding everything wrong with everything, I’d like to take a moment to look at what’s right. Over the past few years, pop culture and social media has made very clear (and loudly) that Rudolph the Red-Nosed Reindeer TV special is a terrible thing, along with the song. 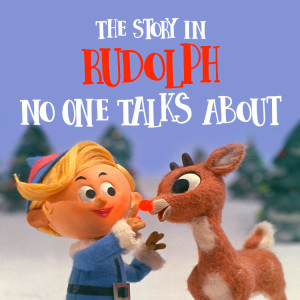 The problem with this is that these people don’t want a happy ending. They don’t want Rudolph to rise up from being called names and ostracized to being the leader of Santa’s package delivery service. They don’t want that. No, they want the bullies, Santa included, to get their just deserts. They want them to get their comeuppance (this is a 1960’s claymation special after all). They want the other reindeer to apologize, even if they don’t mean it. They want the bullies to be made to feel sorry for what they did – even if the only reason they do is because of even more peer pressure. However, that’s not how life always works (Twitter maybe, but not life).

In fact, life works more so how Rudolph works. You see, to those who just want to criticize, Rudolph is a terrible show because the bullies never get taught a lesson and because the biggest bully – Santa – is the one that Rudolph goes to work for. This happens even after all the bad things that they have done.

But this is the greatest lesson and one the world knows very little about – forgiveness. This is the message that gets lost in the noise of criticism. For all the bad that the other reindeer have done, and Santa too, Rudolph looks past it all and sees a need. And even though that need is from someone that has been so mean to him, Rudolph forgives them all and offers his help.

This idea is the same as the heart of God – “but God shows his love for us in that while we were still sinners, Christ died for us (Romans 5:8 ESV).” Verse 10 says, “For if while we were enemies we were reconciled to God by the death of his Son, much more, now that we are reconciled, shall we be saved by his life.” We were the enemies of God, and yet He still died to save us all. It didn’t matter what the other reindeer did. There was something more important than the words someone said or the actions that someone did. There are many today that are defined by the wrongs that have been committed against them (or supposedly against them – or someone they know or knew or are related to), instead of being defined by their own actions.

Jesus came to earth not necessarily to do something about the actions of humanity. He came to earth to satisfy his great love towards humanity. He didn’t come because of the sin problem, He came because of a love for humanity that moved him to do something about the sin problem. Forgiveness is not about what someone has done or hasn’t done. It’s about what you can do. You can forgive and move on, or you can stand frozen in unforgiveness – being tied up in your own lack of love.

Rudolph chose the better way. Sadly, too many people today won’t. They may say that they ‘have a right’ to be mad or offended or whatever the buzz word is. But you also have a right to walk in freedom that comes from forgiving. There’s a freedom that comes from loving others. And sadly, too many people today would choose to hate, hold grudges, criticize, and protest, instead of loving, forgiving, and moving on to create a better life than the one that they have experienced.

Jesus told us to “Love your enemies and pray for those who persecute you (Matthew 5:44 ESV).” Yes, if you watch Rudolph the Red-nosed Reindeer, you will see people bullying poor little Rudolph. But you will also see the wonderful power of forgiveness. In today’s culture, there’s some that want us to teach kids how the world really is. This is a perfect example. Sometimes, maybe even many times, the bully gets away with it. Sometimes, the bully happens to be someone in a position of authority. But always, there is an opportunity to forgive. There’s an opportunity to choose – will you forgive that person and offer to help the one who has been so mean to you – or will you hold a grudge and take joy in their misery?

Will you walk in love? Because this is life – sometimes they’ll never say they’re sorry. Sometimes,  you’ll happen them and they’ll still be mean. But that has nothing to do with you. What has to do with you – is what do you choose to do? Do you choose to walk in love when the only reward is knowing that you did what God wanted you to do? Of course you may be rewarded with even more bullying. What matters more is how you respond. That’s what changes you – not the bullying. Your response to the bullying is what changes you. That’s what determines who you will be. Will you be like Rudolph and choose love and forgiveness?