Note: Don’t stop reading if you get mad, or disagree, or think I’m a nut. Many times we tune people out because of such things and we fail to learn the things God wants us to learn, even if it’s not through the words that are actually spoken or written.

If we look at the modern church today (and actually pray and ponder the state of it), and stand it up next to scripture, we would see that it has become more humanistic than ever before (at least in modern times). I don’t use the term ‘humanistic’ in the traditional, worldview, sense though. It’s become more people-centered, than ever before. In that matter, it has become ‘humanistic.’ 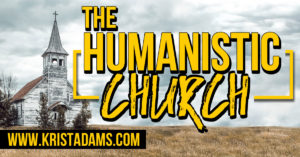 In almost every area of the church at large and in general, we have become so people-focused. From the moment service begins to the moment that it ends, everything revolves around people. In many churches today, their walk-in music, the music that you hear when you first enter the doors, is not worship music, or even Christian music to glorify God. Instead you have secular music like ‘Welcome to the Jungle’ or ‘Gangster’s Paradise’ or some other song that is totally unrelated, and contrary to the things of God. They’re songs that were created with the intent to make money or some other even some other perverse idea. We play these songs because we think people can relate to them, that it make the church a more familiar place. We think that it will welcome people in the doors. In many churches the colors of the wall have been painted certain colors because a rigorous psychological evaluation proved out what is most soothing color to people.

During worship, the church sings songs that are based on emotion, some intangible thought or idea and only partially based on scripture. Lasers and lights dance across the auditorium – not the sanctuary – the auditorium, to keep people’s attention. Smoke fills the room – not the glory of God. It sprays out from a fog machine so that we can create an atmosphere that supposedly makes it easier for people to enter into worship.  Lights are kept low so people feel more comfortable, to create an atmosphere, so people can hide in the crowd. If you brought a Bible, too bad. Get with the times and buy an electronic device that lights up in the dark.

When the sermon is presented, it is a little more than a book report, spliced together with this movie clip or that movie clip, because people’s attention spans are too short to actually pay attention to the Word of God. And within an hour for the whole service, the people are ushered out like cattle so more people can be brought in to get their weekly spiritual fix, and feel like they went to church, even though rarely do they meet with God. All of these things have been created, and purposely designed to make people feel more welcomed, to make people feel more at ease, to get more people in the doors, and keep bringing people back.

This is not Bible.

This may surprise many people, but Jesus was not people-centered. Just that thought alone would stir an argument. The very first thought is that Jesus came to die on the cross for people. That’s true. The next argument would be that He taught people, He loved people, that He healed people, that His earthly ministry revolved around people. This is all true.

However, Jesus was not people-centered. His focus was not on people. His primary goal was not on people. His purpose was not people. And neither should the church’s goal, purpose, or identity. Yet here we are today, a totally people-centered, humanistic church, that has little to do with what the Word of God says, except in little parts sprinkled about.

What was Jesus focused on then? He was focused on God the Father. His main focus all throughout Scripture was on the Father God. If you don’t believe me, go study it out. Repeatedly He talked about how He came to do the Father’s will, He came to glorify the Father. He said that He did nothing except that He saw His Father do it. He rebuked Peter and called him Satan because he did not have the will of the Father as his first desire. Try doing that today. Try calling a church member Satan and see if they don’t storm out of the church, all because they don’t have the Father‘s will as their first desire.  It’s this desire, purpose – being rooted in the Father’s will and plan, that led Jesus to have compassion on people, minister to people, heal people, love people, and die for humanity.

Take a look at what the Bible says about Jesus and why He came.

But that the world may know that I love the Father, and as the Father gave Me commandment, so I do. Arise, let us go from here. – John 14:31

Then Jesus answered and said to them, “Most assuredly, I say to you, the Son can do nothing of Himself, but what He sees the Father do; for whatever He does, the Son also does in like manner. – John 5:19

If you keep My commandments, you will abide in My love, just as I have kept My Father’s commandments and abide in His love. – John 15:10

He went a little farther and fell on His face, and prayed, saying, “O My Father, if it is possible, let this cup pass from Me; nevertheless, not as I will, but as You will. ” – Matthew 26:39

For I have not spoken on My own authority; but the Father who sent Me gave Me a command, what I should say and what I should speak. And I know that His command is everlasting life. Therefore, whatever I speak, just as the Father has told Me, so I speak.” – John 12:49-50

Do you not believe that I am in the Father, and the Father in Me? The words that I speak to you I do not speak on My own authority; but the Father who dwells in Me does the works. – John 14:10

And whatever you ask in My name, that I will do, that the Father may be glorified in the Son. – John 14:13

But He turned and said to Peter, “Get behind Me, Satan! You are an offense to Me, for you are not mindful of the things of God, but the things of men.” – Matthew 16:23

But today we put God in the corner, we’ve put the Holy Ghost in the corner, or completely out of church and we’ve focused on people. We have put people as the main focus, whether we want to believe it or not, whether we agree or not. The church in general has stopped seeking God’s will and started doing it’s own plan. Instead of creating an atmosphere for the Holy Spirit to move, we’ve created an atmosphere for people to come and feel comfortable and distracted. We have lights and flashy graphics that appeal to people’s soul (mind, will, and emotions) or their flesh, and not their spirit. Instead of creating an atmosphere through prayer and scriptural music, we’ve added everything else to reach people, at the expense of offending God.

Instead of spending hours before a service praying for the blessing of God, the presence of God -we gather our gimmicks to appeal to people’s flesh. We feed our flesh on carnal things instead of preparing our heart and spirit on the true things of God.

We’ve become so focused on reaching people we have forgotten that our first job as THE church is not to reach people. Our first duty as THE church is to be with God, please God, glorify God, get His plan and purpose and reach people through those things that He shows us.

This not just a mental decision on our part though. It is a deception by Satan and seducing spirits, one that Paul told Timothy about.

Now the Spirit expressly says that in latter times some will depart from the faith, giving heed to deceiving spirits and doctrines of demons… – 1 Timothy 4:1

This seduction and deception isn’t by a fanged monster with slobber and claws. It’s by the most innocent, seemingly well-meaning thought and idea. “Let’s try this…” “This worked for this musician…” “This would be cool…” “This study says this…”

If we lift up Jesus, He will draw all men unto Him. We must stop seeking to please people and seek to please God. It’s then, as we take time out of doing all the stuff, that He will show us what to do to be a success.

Revelation 3:20 says, “Behold, I stand at the door and knock. If anyone hears My voice and opens the door, I will come in to him and dine with him, and he with Me.” This is Jesus talking to the Laodicean church. The saddest part is that Jesus is standing outside the church knocking and nobody realizes that Jesus isn’t in the church because they’re too busy with their own ideas about doing church.

Let us stop doing church based on the ideas that we have had, the plans that we have had, even if it costs us thousands of dollars we have already invested in our own plans. Even if it costs us time and energy, humiliation in front of us, times of repentance in front of congregations or even the world. It’s worth all of it to be in God’s perfect plan, seeking His plan and His will for every area of our life. Let’s stay with the Word and the Spirit.