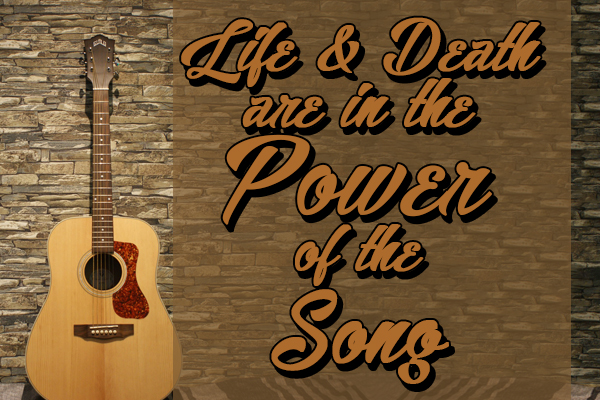 For teenagers, this is a vital biblical truth to learn. That’s because music plays an important part in a teenager’s life. Think about it, if you’re a teenagers, how much music do you listen to? For those who aren’t teenagers, think about how much music your own kids listen to or His much you used to listen to when you were a teenager? Teenagers are consumed with music. They’re consumed with media. But it’s music that they are vocal about. They sing along with the lyrics. They confess what their music says. And for some Christian teenagers, the music they listen to isn’t necessarily biblical. Depending on the spiritual maturity or the dedication of the individual, the music they listen to may not even be Christian. And what they are singing about in that song is what they are confessing. And even if they are listening to “Christian music,” that doesn’t mean the Christian music is biblical. Just because it has the label “Christian,” that doesn’t mean it agrees with the Bible.

I was having a conversation with one of the youth in my youth group one Sunday night after I just got done preaching about the importance of your words that morning. We started talking about a specific Christian rock band. And she was talking about how great they were and asked if I liked this one particular song. I told her that I like the band, but I didn’t like that song. She asked me why and I told her why – that you’re singing this song and you’re making such a negative and unbiblical confession about who you are. This was the exact same thing that I told her and the rest of the group earlier in the day. And she just didn’t get it. Her exact words were – “it’s just a song.”

It doesn’t matter if it’s just a song. It’s still your words. It’s your confession about who you are, where you want to go and what you want to do. And those words are not idle words. The Bible says that we will be judged by every idle word that we say. It says that we will have what we say. There are a lot of Christian bands that I like, but I don’t like some of their songs. That’s because those songs do not agree with the Bible. So I just choose not to sing them, or listen to them, even though they have a catchy tune or are from that specific band.