There’s been a few different songs popping up in worship services across the country, and on the radio that declare that God is fighting for us. They’re harmonizing how the battle is the Lord’s. But let me asking you this, “Do you believe that?” Do you really believe that the Lord is fighting for you? And if so, what are you supposed to be doing while He’s fighting. Just praising God? Anything else? 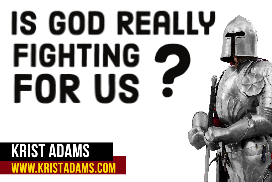 “Well that’s what the Bible says,” some may say. Does it? Does it really say that? Are you sure? Does it say it to you? There’s a lot of things in the scripture where God is saying something, but He’s saying it to a specific person or group. Has God said that He is fighting for us today?

A couple months ago, when a Hillsong worship leader and song writer stepped out and said he doesn’t believe in God, and hasn’t for some time, the Christian world was shocked. Honestly, we shouldn’t have been. We should have a relationship with God and be led by the Spirit and in communion with Him so much that we know these things and know things that are going to take place – because that’s what he has promised us. But in the midst of this, the lead singer of the group Skillet, John Cooper, made some bold statements. One of those was that worship leaders, song writers, aren’t the best theologians. They’re more concerned with harmonizing and making good choruses and verses than perfect doctrine.

Essentially, you shouldn’t be getting your doctrine from worship songs. You should be getting it from the Bible. So what does the Bible say? Let’s look at that.

The Battle Is The Lord’s

Where is the scripture found in the Bible? If we’re continually declaring something, it’d be good to know where it’s at. So where does it talk about the Lord fighting for us? Well, it’s actually found in a bunch of different places.

And he said, “Listen, all you of Judah and you inhabitants of Jerusalem, and you, King Jehoshaphat! Thus says the LORD to you: ‘Do not be afraid nor dismayed because of this great multitude, for the battle is not yours, but God’s. – 2 Chronicles 20:15

Then all this assembly shall know that the LORD does not save with sword and spear; for the battle is the LORD’s, and He will give you into our hands.” – 1 Samuel 17:47

for the LORD your God is He who goes with you, to fight for you against your enemies, to save you.’ – Deuteronomy 20:4

There’s a few more scriptures that you could say were talking about the Lord fighting for us, or the battle being His. So it is a scriptural statement to say that “the Lord is fighting for us.” But who is that “us”? All those scriptures not mentioned have the same thing in common with the above verses. Do you see the common thread?

Every verse comes from the Old Testament…before Jesus came.

Yes, there is still truth in these verses. There are principles we can learn from them. They haven’t been done away with. We don’t throw them out. We don’t trade our highlighter in for a sharpie. But there is a greater truth today for us. That greater truth is Jesus Christ.

How does what Jesus did on the cross change these verses for us? Let us ask, what did Jesus do on the cross? What was accomplished when Jesus went to the cross, died, and rose again? So many Christians limit Jesus to having done so little on the cross and miss out on the fullness of all that Jesus provided to us through our inheritance.

When Jesus went the cross, not only did He make a way for us to be forgiven, have our sins washed away, and make a way to Heaven – He did so much more. He gave us the authority to use His name. That’s just like Jesus Himself being here saying it. That’s the power of His name. It’s just like a police officer. A police officer only has as much authority as the power backing him. Our authority has Jesus backing us. It has all of Heaven backing us.

When Jesus went to the cross, He said that it is finished. What was finished? Many things actually. But one of those things that was finished was the devil’s authority over you. Jesus went to the cross and defeated the devil. The battle has already been won. It’s over. The devil is defeated. Of course by looking at some Christian’s lives, you wouldn’t know it. The problem we have is that many Christians don’t understand their authority or they don’t exercise it, so they don’t walk in the privileges that Jesus has granted us.

In war, after an army has been defeated, there is an occupying army. They stay in the area making sure that the defeated enemy doesn’t do anything they’re not supposed to do. If they try to do anything, the occupying army goes into action and enforces the rules that have been put in place. That’s what we’re doing.

If you drive down the road, you can notice car after car driving beyond the laws set forth by the governing authors and posted on speed limit signs. They will continue to speed until a police office comes along to enforce the law that’s already there. We are the law enforcement officers enforcing the defeat that’s already in place. We’re not fighting. We’re enforcing.

So what does the New Testament say about God fighting for us? What does it saying about the battle being the Lord’s? After Jesus has come and brought the victory, what does it say about the Lord fighting for us? Absolutely nothing. It doesn’t saying anything about the Lord fight for us. It doesn’t say anything about the battle being the Lord’s. It does talk about us Christians doing something to enforce the defeat. It does talk about us Christians fighting, using the authority we’ve been given.

Therefore I run thus: not with uncertainty. Thus I fight: not as one who beats the air. – 1 Corinthians 9:26

Fight the good fight of faith, lay hold on eternal life, to which you were also called and have confessed the good confession in the presence of many witnesses. – 1 Timothy 6:12

I have fought the good fight, I have finished the race, I have kept the faith. – 2 Timothy 4:7

The Apostle Paul says that we are to fight the good fight of faith. We are to fight. Not God, but we are to do it. Why is it a good fight? Because it is the fight of faith, and faith always wins. If you’re in faith, you win. You get what you believe for. Faith always sees the answer, it always sees the victory. Faith says what God says is true and sees it come to pass.

But that’s not the only time that the New Testament talks about us fighting rather than God fighting. Jesus told the disciples, and us, right before He went back to heaven, what we were supposed to be doing on the earth.

And these signs will follow those who believe: In My name they will cast out demons; they will speak with new tongues; they will take up serpents; and if they drink anything deadly, it will by no means hurt them; they will lay hands on the sick, and they will recover.” – Mark 16:17-18

Jesus came and spoke to them, saying, “All authority has been given to Me in heaven and on earth. Go therefore… – Matthew 28:18-19a

Jesus said that all authority in heaven and earth was given to Him. In the very next sentence He tells us to go out and do something. Why? Because He has given the authority to us to do something about what’s going on. The authority wasn’t just for Him. It was for the church. He is the head, we are the body. We have the same authority that He does to do to do the same things that He did because we are one.

We’re also told that “…whatever you bind on earth will be bound in heaven, and whatever you loose on earth will be loosed in heaven (Matthew 18:18).” That’s part of us doing the work because of the authority that’s backing us. It’s no longer us going to God and waiting on Him necessarily. It’s Him giving us the ability to do it through His name, His blood, His strength – all because of Jesus.

Paul tells us some more about this in Ephesians. He says, “For we do not wrestle against flesh and blood, but against principalities, against powers, against the rulers of the darkness of this age, against spiritual hosts of wickedness in the heavenly places (Ephesians 6:12).” It doesn’t say that we don’t wrestle. It says we don’t wrestle with humans – flesh and blood. We wrestle with spirits – demonic entities making trouble on the earth, waiting for the victory to be enforced over them. If we don’t do something about it, it’s not going to happen.

We’re already told that we have the victory, it’s up to us to enforce it. “Yet in all these things we are more than conquerors through Him who loved us (Romans 8:37).” What does it mean to be more than a conqueror? It’s the same thing as a boxer going into a big fight and winning, getting the winner’s purse/check, and then coming home and giving it to his wife. The boxer conquered. His wife is more than a conqueror. Jesus got the victory for us, all we have to do is enforce it. We have the victory. There’s no more fighting. The fighting is just us agreeing with the Lord, getting in faith, and enforcing what’s already on the books.

But thanks be to God, who gives us the victory through our Lord Jesus Christ. – 1 Corinthians 15:57

We can rest assured that when we have to go enforce the victory (fight), that we already have the victory. Stay in faith. Do what the Bible says to do. And you’ll fight the good fight of faith, you’ll come out on top.

We have to always remember, that just because it’s in a song, that doesn’t make it so. Even if it’s in a song being sung in your church, in any church that knows the Word and flows in all God has called us to live in. I’ve been in several churches that know the Word and the Holy Ghost and they’re still singing songs that are in direct contradiction to the Word of God. I don’t sing them. I’m not letting that unbelief garbage getting in my mouth or my spirit. I’m agreeing with the Word. You should too.

One verse I love and often look at is found in Acts 17:11, because it expresses what every believer should be doing on a daily basis. “These were more fair-minded than those in Thessalonica, in that they received the word with all readiness, and searched the Scriptures daily to find out whether these things were so.” Are we making sure that the things we are believing agree with what the scriptures say? Or are we agree with what a song says, what sounds good, or what a minister says? God is obligated to make His Word come to pass because He obligated Himself. But He is not obligated to make what you believe come to pass UNLESS it agrees with the Word. So believe the Word, know the scriptures, speak them out of your mouth. Stay with the Word and the Spirit.