So Solomon overlaid the house within with pure gold: and he made a partition by the chains of gold before the oracle; and he overlaid it with gold.

And within the oracle he made two cherubims of olive tree, each ten cubits high…

And he overlaid the cherubims with gold.

And the floors of the house he overlaid with gold, within and without.

And Solomon made all the vessels that pertained unto the house of the Lord: the altar of gold, and the table of gold, whereupon the shewbread was,

And the candlesticks of pure gold, five on the right side, and five on the left, before the oracle, with the flowers, and the lamps, and the tongs of gold, 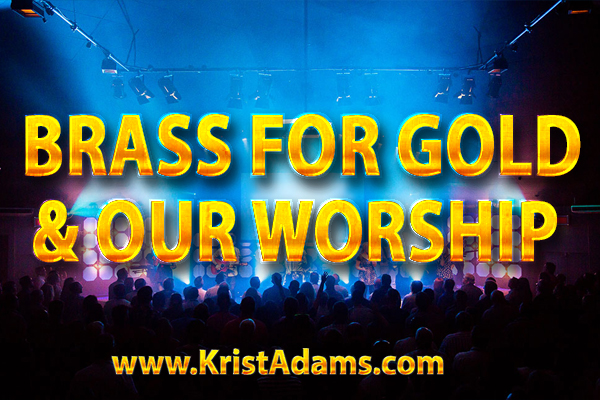 Instead of which king Rehoboam made shields of brass, and committed them to the hands of the chief of the guard, that kept the entrance of the king’s house.

What is brass? It is a mixture. It’s an alloy made up of copper and zinc. It is not pure like gold. King Rehoboam placed the pure gold utensils with those made of brass. And it represents the things of the world that the church (as a whole) has introduced. Instead of following God’s plan for the church, we have brought in the things of the world, the way the world does things, our own plans, and left God’s plans behind. Now the Lord will bless us as much as He can. But there’s only so far He can bless us when we won’t follow His plans.

Back in the book of Exodus, the Lord told Moses to build the Ark of the Covenant so the Lord would have a place to dwell with His people on earth. God gave Moses specific instructions, a plan to follow, and once the Ark was finished according to God’s plans, something happened.

“… So Moses finished the work.

Then a cloud covered the tent of the congregation, and the glory of the Lord filled the tabernacle.

And Moses was not able to enter into the tent of the congregation, because the cloud abode thereon, and the glory of the Lord filled the tabernacle.”

How have we done that? In many ways. But specifically, in this post, we have done it in our worship. God’s Word says that we are to worship in spirit and in truth. John 4 says that the Father is seeking true worshippers for those who will worship Him in spirit.

Well, if you look across the nation, in churches, you’ll see a huge change of how worship services are conducted. It seems that as technology has increased, as we’ve all gotten more “modern,” so has our worship services. But that’s not necessarily a good thing. We now have worship services with videos playing during the worship. We have all sorts of colorful lights flashing across the room while the main lights in the auditorium are turned down. There’s lasers going off everywhere. In fact, if there’s not a blind person in the room for Jesus to heal, our worship services might just make one with all their lights.

We have smoke machines stinking up the air, trying to imitate the presence of God. We even sing songs that have no anointing on them at all. Songs singing at God instead of to God. Songs that were thought up around a beer, instead of in prayer.

But what is so wrong with all of this you ask?

What is the purpose of worship? Is it not to enter into the presence of God? Is it not to get closer to God? And is God not a spirit? Aren’t we supposed to worship God in spirit? Aren’t all these lights and lasers and smoke just a cheap substitute for the true presence of the Lord? Aren’t they just catering to the soul, instead of the spirit? Is the smoke a counterfeit for the true presence and glory of God? The lights- a way to entice the souls of men?

I have another idea on this issue though. I believe the lights and lasers and smoke aren’t really for God. They have nothing to do with God. People will stop me here and say that the purpose of the lights, the smoke, even the lasers – is to create an atmosphere, to welcome in the presence of God.

This I could understand. However, we want to be Biblical. As Christians, it is necessary that we live and act according to the Bible. If you study the Bible, no where do we see the presence of God ushered in through lighting. Nowhere do we see an atmosphere being created by lighting. We don’t see apostles, prophets, believers turning off all but a few candles. But we do find other instances of the presence of God being ushered in- an atmosphere being created.

But now bring me a minstrel. And it came to pass, when the minstrel played, that the hand of the Lord came upon him (2 Kings 3:15)

It came even to pass, as the trumpeters and singers were as one, to make one sound to be heard in praising and thanking the Lord; and when they lifted up their voice with the trumpets and cymbals and instruments of musick, and praised the Lord, saying, For he is good; for his mercy endureth for ever: that then the house was filled with a cloud, even the house of the Lord; So that the priests could not stand to minister by reason of the cloud: for the glory of the Lord had filled the house of God (2 Chronicles 5:13-14).

But thou art holy, O thou that inhabitest the praises of Israel (Psalms 22:3).

And when they had prayed, the place in which they were assembled was shaken; and they were all filled with the Holy Spirit, and they continued to speak the Word of God with freedom and boldness and courage (Acts 4:31).

And at midnight Paul and Silas prayed, and sang praises unto God: and the prisoners heard them. And suddenly there was a great earthquake, so that the foundations of the prison were shaken: and immediately all the doors were opened, and every one’s bands were loosed (Acts 16:25-26) [I understand this scripture isn’t specifically talking about the presence of God, but it is talking about the power of God showing up after praise and worship].

And when they were come in, they went up into an upper room, where abode both Peter, and James, and John, and Andrew, Philip, and Thomas, Bartholomew, and Matthew, James the son of Alphaeus, and Simon Zelotes, and Judas the brother of James. These all continued with one accord in prayer and supplication, with the women, and Mary the mother of Jesus, and with his brethren…And when the day of Pentecost was fully come, they were all with one accord in one place. And suddenly there came a sound from heaven as of a rushing mighty wind, and it filled all the house where they were sitting. And there appeared unto them cloven tongues like as of fire, and it sat upon each of them. And they were all filled with the Holy Ghost, and began to speak with other tongues, as the Spirit gave them utterance (Acts 1:13-14, 2:1-4).

In these scriptures, the presence of God was ushered in through music and through prayer. We have been getting it right as we worship God, we always have. But in the past few years we have gotten off by incorporating flashy lights, smoke, and other things that cater to the soul of men and not the spirit of men and the spirit of God.

It is the nightclub. The church has become a nightclub. Many of us in the church don’t understand this because we have never been to a nightclub. We have never stepped into one to experience what it is like. God has rescued us from that experience. However, it’s simple. If you step into one of these churches that have the flashing lights, lasers, and smoke, you have indeed stepped into a nightclub. If you have been to a nightclub, if you came out of it, if God has delivered you out of it, then you understand what I mean. If God has done this for you, then I’m sure these services and churches repulse you. In fact, I’ve heard stories from people that God has delivered out of the nightclub scene and all that comes with it and they don’t understand why the church is trying to be like a nightclub. They are repulsed by the whole concept of the church as a nightclub because they know the sin that comes with it, as they were once lost in that sin.

But stepping into a nightclub you will see the main lights dimmed, flashing colorful lights blinking on and off, souring across the room from the stage. You’ll see smoke and haze coming from behind the curtains. You’ll see entertainment.

Look at the images below. They are mixed up, untitled, but all are either of a church service or a nightclub. Most of them, if not all of them, are hard to identify as a church or a nightclub. That is because the church today is mimicking the nightclub scene. God forgive us.

We have decided to do things according to our plans, our ways – which are the world’s ways really. We have brought in the ways of the world – the lights, the lasers, the smoke – and placed them in the church. We have brought the unholy into the holy.

We have exchange the Gold of the Lord’s plans for the Brass of ours. I pray God forgives us. And I pray that the church will seek God’s face, not the world, to see how to do everything – how to conduct our church services, how to live our lives, how to do things His way. God is with us and He will have His way.