What America needs these days is not more churches. Honestly, American has enough churches. If you go around almost every town, you’ll see a church on every other street corner. You’ll see churches everywhere. In my hometown, there’s a place that in one block,  where there is a church on every corner of the block and two more on the adjacent blocks. Where I live now, there’s three churches in a row on one street. I’m sure there’s similar places that you know of. 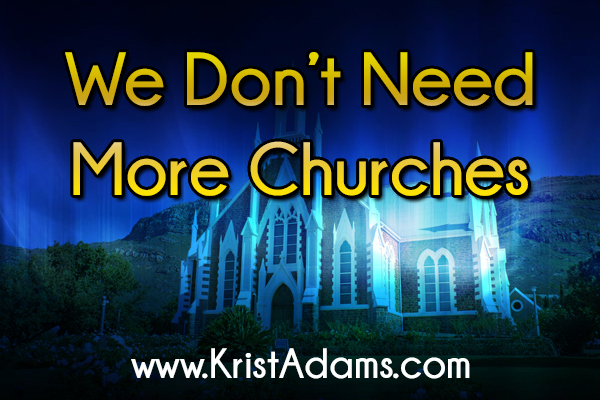 Sure, you have them with different denominations, but almost every single one of them is preaching the same foundational message of salvation solely through the shed blood of Jesus Christ and the acceptance of His sacrifice. But we have enough churches.

I guarantee you that if we had the power of God showing up and operating in church services every single time we come together – sign, miracles, and wonders – blind eyes being opened, deaf ears hearing, the lame walking – you wouldn’t need another church. You wouldn’t need to advertise. The word of mouth advertising would be enough. People wouldn’t be able to stop talking about the services and all the miraculous things God was doing. There would be no reason to put up a flyer. Honestly, there would be no reason to put a website to advertise, there’d be no need to jump on a social network and tell when the next service was. Why? Because people would be talking. People would be talking to you. People would be finding out where you were and how they could get to where you were.

You would have news stories done about your church. The media would be coming to you. The fire department would be coming to you to put out the fire on the church building’s roof just to find out that it’s the tangible, physical evidence of the Holy Spirit and the power of God in the church. We don’t need another church. We don’t need someone who has a successful church going out an pioneering a new work unless God has told them to do it.

I heard someone say just the other day that patience was not their strong suit. Another person said they hated waiting. I don’t like waiting either, but sometimes we have to wait. We have to wait on God. We have to spend the extra time in prayer. Lord knows I haven’t arrived, but I know where I’m going. I know what my goal is. If we would spend our time in prayer, seeking God and getting His plans, instead of asking God to come in on ours – we’d be more successful at church. Instead of saying, “God, this is the plan. Bless it,” we should be asking what God’s plan is that is already blessed.

Moses waited on the mountain for 40 days before God spoke to him. What if he would have left at 39 days? He wouldn’t have gotten God’s plan. He would have had His own and would have wondered in the desert twiddling his thumbs, not knowing what to do.

Don’t get me wrong. If God is calling you to start a church or anyone to start a church, then we need that church. I’m not talking about that. I’m talking about another church that someone wants to start because they think it’s a good idea. We don’t need churches started because someone thinks it’s God or because that’s what they did last time. We don’t need dry, dull churches started by people that came out of dry, dull churches.