There is this idea going around, not just in the church , but in the world about the love of Christ. In fact, it started in the world. You’ve seen it propagated by those that don’t even know Christ, yelling at Christians that we should know better. They yell at us that we’re not being vey Christian. 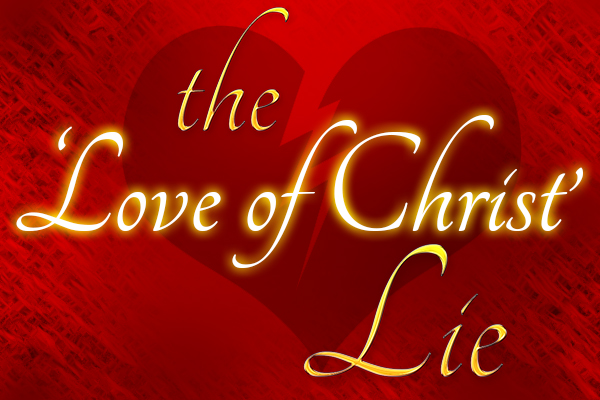 Oh yes, they can have more ‘book smarts’ than a Christian, but they can not know the Bible more than any Christian. Why is that? The Christian knows the Word of God enough that they have let it transform them into a child of God. No non-believer knows that. And if they do, they don’t know it enough to let it happen.

So you have had non-believers telling Christians that they’re not acting Christ-like. They tell us that we’re hating and not real Christians. For years this has been going on and wasn’t anything new. The majority of times, these misled and deceived individuals have been a little more than a nuisance to the church.

However, their deception has entered the church. You now have Christians telling other Christians, churches and ministries that they’re not being Christ-like, that they’re not following the teachings of Christ. They speak out, in the same words that the world has used, and tell Bible-believing Christians that we need to show the love of Christ to people. Well friends, I want to tell you that what they’re selling is a bunch of bunk, junk, and hogwash. What does that mean? It means it’s a lie from the pit of Hell.

The church has allowed this false doctrine of embracing everything under the guise of the love of God, the love of Christ, and it is tearing the church apart, leading people astray, and moving the church away from what it is supposed to be doing. This thing is from the pit of Hell. We have entire denominations, internationally known ministers and ministries proclaiming that homosexuality is just as right and moral as heterosexuality. No! It’s not.

The Bible is clear. From the Old Testament to the New Testament – Genesis to Revelation, the Bible tells us ALL that homosexuality is an abomination of the devil. But we now have Christians, ministers of the Gospel, standing in the pulpit telling congregations, Christians,  people all over that this thing is of God.

But you know what, it’s not! It’s not of God. It’s of the devil! ‘Now, Brother Krist, you’re not being very Christ-like. You’re not showing the love of Christ.’ Yes I Am! The problem is that many in the church don’t even understand what the love of God is. That’s why people who are deceived can stand up and say that other Christians aren’t showing the love of God and so many people will believe them. They’re deceived by seducing spirits into believing a demonic false doctrine and they’re leading others astray.

The Christians that are left that are still sitting on the fence post of this issue need to get their Bible and read it! All of it. Not just a few scriptures pulled out of context. All of it!

God loves everyone. But He will not condone their sin. He is a holy and righteous God. And when the time comes, we better be found standing with God and the Word of God and not against them.

‘Now Brother Krist, there you go again not showing the love of Christ.‘

Let me ask you this, if a sewer line breaks and starts flooding into your neighbors’ drinking water, are you just going to stand there and watch your neighbors drink that disgusting, poisoned water when they have no clue that it’s been contaminated? No. If you have any conscious, you’re going to tell them.

‘Oh, now you’re comparing homosexuals to sewage? You’re saying homosexuals are as bad as sewage?’  No! I’m saying this lie that we need to embrace everything to show the love of Christ is sewage. And one of the biggest things that is hindering the church as a whole right now is this lie that we must embrace homosexuality or else we’re not showing the love of Christ. I’m comparing the two. I’m not saying they’re the same. This is worse. Far worse. If the drinking water is contaminated all you do is go grab a bottle of water or find another source of drinking water. But who else has living water?

No one! There’s no other way this world is going to be saved. There’s no other way to Heaven except through Jesus Christ. And the devil know that if he perverts that and tells people that living in sin is okay, then they can live their entire life thinking they’re going to Heaven and end up in Hell when they die. He can get the church divided, split so they’re too busy dealing with this instead of preaching the Gospel. He can get the church to embrace the false, so they’ll never receive the true.

But he’s not going to win. No. Bible-believing Christians are going to stand up, take their place in prayer and get rid of this thing through the authority that Christ has given to the church – His church, the true church.

Now we may love people no matter what is going on in their lives. If they’re the most lovely saints, the most foul-mouthed, hateful person – homosexual or not – we love them. God loves them. But He cannot and will not condone their sin. And if they will not turn from their sin, they will wake up after they leave this world and find themselves in Hell.

And as far as this loving Jesus idea. Would you like to take a look at your Bible. If you have a read letter edition, you will find these Words in red, as they are the words of Jesus Christ:

I will kill her children with death, and all the churches shall know that I am He who searches the minds and hearts. And I will give to each one of you according to your works. – Revelation 2:23

Jesus is a killer! Yes. He is. And He makes it clear. He’s not denying it. There goes that loving Christ thing. Or how about this, Christ is loving. He loves everyone. But above all, He loves His church, His people, and He will not allow things and people, doctrines and spirits to come against them and destroy them. He loves them so much that He will not allow the devil to destroy them through false doctrine and seducing spirits.

How do you make sure that you don’t fall for these seducing spirits, these doctrines of the devil? It’s simple. Stay with the Word of God. No matter what comes your way, what teaching, what loud person yelling one way or another – stay with the Word of God. You will never find anyone who knows the Scriptures, the whole counsel of God’s Word, who has gotten off in false doctrine. You may find people that think they know the whole council of God Word who have, but not those who know the Word. That’s the importance of being students of the Word.

And remember, God is love, we are to love people with the love of Christ, but that doesn’t mean we embrace everything that comes our way. Stay with God and His Word, and you’ll be okay.

Previous Post: « The Little Engine That Could Had It Right
Next Post: You Don’t Need God To Do Church »