It’s Christmas time again, which means, among other things, celebrating those family traditions. One that we always had in my house growing up was watching A Charlie Brown Christmas. There was something about the dopey Charlie Brown that you just have to feel sorry for….and enjoy watching.

It wasn’t until I grew up that I realized the big truth in the show – what Christmas is all about. Yes, I watched it for years and just saw a nice Christmas cartoon. But one day, something happened and it became more than a cartoon; it was a cartoon that included the message of salvation. All those years I watched and didn’t get the whole point of the show. I missed it like Charlie Brown did. 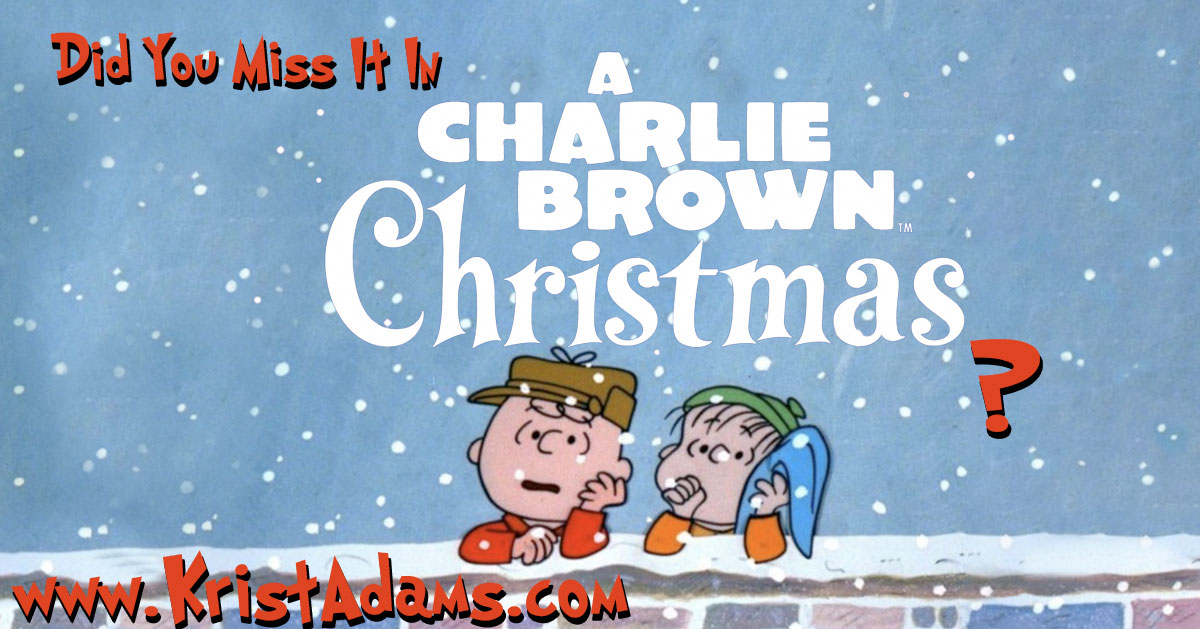 But then I accepted Jesus Christ as my Lord and Savior and my eyes were open to see what Linus saw – that Christmas is about the birth of Jesus….and more.

Honestly, if you just think on that, you could get into fear real quick – fear of the unknown, fear of what could be and what could happen, fear of what you can and can’t do or stop. You could let fear control your entire life. You could get into fear after hearing a loud trumpet coming from Heaven, or after hearing the heavenly hosts sing, or an angel appearing to you.

But God is quick to extinguish that fear when it comes to Him and those that are carrying out His will. When an angel appears to Zecharias, the husband of Mary’s cousin Elizabeth, it is quick to cut out fear: “But the angel said to him, “Do not be afraid, Zacharias, for your prayer is heard; and your wife Elizabeth will bear you a son, and you shall call his name John (Luke 1:13).”

Jesus separates us from our fears. When we come into a real relationship with him, and understand the love He has for us, fear is extinguished. Perfect love casts out fear. Psalms tells us, “The Lord is my light and the one who saves me. So why should I fear anyone? The Lord protects my life. So why should I be afraid (Psalm 27:1 NCV)?”

When watching A Charlie Brown Christmas, have you noticed what Linus does as he recites his monologue of Luke 2:8-14. Linus tells our bald headed pessimist, “Sure Charlie Brown, I can tell you what Christmas is all about.” He continues, quoting Luke 2:8-10, “And there were in the same country shepherds abiding in the field, keeping watch over their flock by night. And, lo, the angel of the Lord came upon them, and the glory of the Lord shone round about them: and they were sore afraid. And the angel said unto them, Fear not…”

Then it happens. Have you seen it? Or like me as a child, did you miss the whole thing?

Linus drops his blanket. That security blanket that he carries everywhere. That security blanket that he wouldn’t give up for all the money in the world. He drops it. And he drops it at the words “Fear not.” It’s not just any “fear not.” It’s not like these were words from Charlie Brown, Lucy, or someone else. If they were, he would still be holding it. The words “Fear Not” came from an angel of the Lord Most High. It came from an ambassador of Heaven. It’s the same as if God Himself was saying FEAR NOT.

The words of man are simply false security – just like Linus’ blanket. A person saying Fear Not means nothing because honestly, what are they going to do? Yes, they can give some form of protection. But ultimately, no man can keep you from harm, from destruction, from death and the grave. No man can keep you safe from the wages of sin and Hell. Oh but God! At the Word of God, at the word of the Lord Most High – FEAR NOT becomes a truth for your life to be established on. It becomes the fresh, fertile soil to be planted in and not be moved. The Word of God, even spoken through an ambassador – through an angel or through a man – is enough, if you have faith in it, to keep you smooth in troubled times, on troubled seas.

But let me take this a step further. Don’t just turn off the video there. Keep watching. Linus finishes up verse 14, “Glory to God in the highest, and on earth peace, good will toward men” and picks his blanket back up and walks off. He picks that false security back up. We do the same thing. We hear the Word of the Lord, we drop our false security and we put it all in God, trusting in Him. But then something happens. Whether it’s hard times, getting carried away with the things of the world, things start to go good, or maybe we just don’t understand the Word – we drift away and pick that false security back up. We start putting trust back in our own ideas and our own plans. We pick that blanket up, just like Linus.

We’re not alone in this. Linus isn’t alone in this. Elijah stood against the prophets of Baal, and mocked them, yet right after his confrontation on Mt. Carmel ran in terror.  The Apostle Peter walked with Jesus for three years, yet denied him three times when people suggested he knew the Master. Sometimes that blanket has been in our life for so long, it seems ‘natural,’ like it should be there. But it shouldn’t. That’s why Linus gets made fun of by Lucy. He’s too old for that blanket. He should grow up and leave it behind.

That’s not the end for Linus here though. At the end of A Charlie Brown Christmas, Linus shows us what we should do. The story is no longer about the tree that Charlie Brown has been searching for most of the show, but it’s about Jesus – what Christmas is all about, what life is all about. As the cartoon closes, it transitions from “Oh Christmas Tree,” focusing away from a tree, a thing, stuff, things we have done, things we have made happen. It transitions to “Hark the Herald Angels Sing, Glory to the Newborn King.” We move from us and what we can do to what God has done and what God can do.

“Christ has redeemed us from the curse of the law, having become a curse for us (for it is written, “Cursed is everyone who hangs on a tree”), that the blessing of Abraham might come upon the Gentiles in Christ Jesus, that we might receive the promise of the Spirit through faith.” – Galatians 3:13-14

Linus lays his blanket down at the Cross. Have you laid down your blanket at the cross or are you still holding onto it?