“If you’re looking for some great freebies, come out to my church. We have giveaways all the time – we give away bikes, TVs, iPads, household appliances, and more. Heck, while you’re there getting free stuff, why not try on Jesus Christ. One size fits all.” 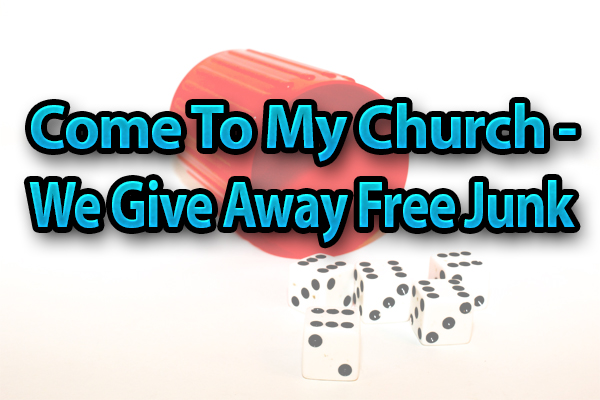 Yes. I’m being sarcastic. But not in a bad way. Just to make a point. And no, my church doesn’t really do those things. But there are many churches across the nation that subscribe to this point-of-view. They have this idea that if they lure people to church with free gifts, lottery-type drawings, giveaways, etc, that they might get saved during the preaching portion of the event.

I’m not saying it’s totally wrong to have giveaways. If you feel so inclined to bless your community – go for it. But if the whole point of the event is to lure people to your church to grow your church, and get people saved – make sure it’s God’s plan and not yours.

We too often fall back on our own plans and doing things that seem good. And sometimes we get results, sometimes we don’t. It’s really a toss up. Sure we can pray and ask God to bless our plans. But wouldn’t it be better to pray and get God’s plans. Maybe He’ll say not to give away anything, but to pray until the people come because the power of God is so strong. Or maybe He’ll say to give away an iPad, but then we’ll know it’s His idea and guaranteed to be a success.

This scripture can really be talking about many things. It could be talking about the plans of man – the ones that seem right, but the end of them is death.  That death could be failure, or it could be physical death. Take for example a church in my area. A couple of years ago they held a large outreach that appealed completely to the soul and flesh of men. The intent seemed to be to let the people of the city know that they were in the city. I’m not sure if the Gospel was preached that night, but I’ll give them the benefit of the doubt. Among the games and fun of the night, the main attraction was a boxing tournament. But during one of the boxing matches, one of the participants entered the ring, but was carried out. He had a condition that no one knew about and after a few minutes he was knocked out and died.

I’m sure the people that put the event together thought it was a great idea, that it would reach people for Christ, but the end was death. That church is still open, but has been sued repeatedly and to my knowledge, is still under investigation by the state and being sued. It’s vitally important – life and death – that we lean to get God’s plans for our ministry and life, and not rely on our own plans. As we do so, the Holy Spirit will lead us into success and humanity will be blessed through us.