Relevant has been a term that has been used, over-used, and to some degree, killed. So many people talk about being relevant, that we have to be relevant to reach the world and to reach this generation. They hold conferences on being relevant. They have websites and magazines and other resources that are all about being relevant. At one time, I bought into this idea that Christians need to be relevant. Then through thought and prayer, I realized that Jesus was relevant (duh), but it was the Christian’s job to show the world that He was relevant. 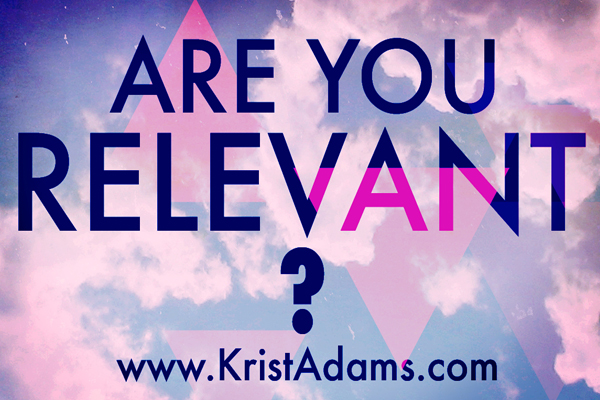 However, even that now I doubt and disbelieve. It is clear that Jesus Christ is relevant. He is the only one in the whole world that is relevant. If no one else is, if nothing else is, He is relevant. Every person in the world, regardless of skin color, age, ethnicity, language, location, or any other factor NEEDS Jesus Christ. He is the only one that has or ever could pay for our sins. That makes Him as relevant as can be. Though this is the case, this term relevant is not really what we all think.

Being relevant is a quality of one who is too preoccupied with not offending those they are trying to reach and desire to be more like their culture and less like their God, even if the intent is to reach the culture for God.

I know of one young man who was said just that. He was honestly searching, searching out spiritual things and for that someone he couldn’t put a name to. He went to a church trying to see if it was Jesus he was looking for, but do you know what his response was? They’re just like me. There’s no difference. Why would he wanted to be like them if they are just like him? Instead, he turned to Buddha.

In doing so, in trying to make themselves relevant, some Christians and churches have made themselves more irrelevant than they know. Why would any non-believer want to be like someone who is just like them? No! God hasn’t called us to act like the world, to look like the world, or to be like the world. He’s called us to be holy and set apart. We’re called to be a peculiar people. Do you know what peculiar means? It means different. It means strange, unusual, or exclusively belong to something or someone. It means not being like everyone else.

The Apostle Paul says he became all things to all men so that some men might be saved. (1 Corinthians 9:19-23). Does that mean he became a sinner to save the sinner? Of course not. In fact Paul speaks against that : What then? shall we sin, because we are not under the law, but under grace? God forbid. (Romans 6:15 NKJV).

Many use the words of 1 Corinthians 9 to justify the way they dress, act, talk, and are – so that they can reach the lost. However, that has nothing to do with what Paul was talking about in this scripture. Look how The Message words 1 Corinthians 9:19-23:

Even though I am free of the demands and expectations of everyone, I have voluntarily become a servant to any and all in order to reach a wide range of people: religious, nonreligious, meticulous moralists, loose-living immoralists, the defeated, the demoralized—whoever. I didn’t take on their way of life. I kept my bearings in Christ—but I entered their world and tried to experience things from their point of view. I’ve become just about every sort of servant there is in my attempts to lead those I meet into a God-saved life. I did all this because of the Message. I didn’t just want to talk about it; I wanted to be in on it!

Granted, some who are trying to be relevant have this exact same intent in mind, however, Paul did not change who he was, what he filled his mind and spirit with, or anything else other than what has been stated, to reach those he was sent to.

If you look throughout the New Testament, you will see that as the followers of Christ went out to preach the Gospel, they did not act or look like the ones they were trying yo reach. They acted and looked like Jesus!

And do not be conformed to this world, but be transformed by the renewing of your mind, that you may prove what is that good and acceptable and perfect will of God. – Romans 12:2

God doesn’t want us to be like the world, but that is what so many churches and Christians are doing. They are becoming more and more like the world in an attempt to win the world and they are getting farther and farther away from God. But God has not called us to be like the world. God has called us to be more like Him. And the funny things is, if that is the right word to use, is that the world wants the same thing. The world is tired of the same thing. They are tired of what they have and see. The world can go to any bar, business, school, club, etc and find people and things that are exactly like them. What they want and need is something different – and that something is Christ in you, the hope of glory!

The world doesn’t need another church that is ran like a business, another church that is marketed like a Silicon Valley startup, another Christian with the same clothes, the same hairstyle, the same attitude, the same likes, who does the exact same things they do, while sacrificing their commitment to God and His Holy Spirit. They’re looking for a church, they’re looking for a Christian with the power of God! And the only way to get that is not to be like the world. It is to be like Jesus.

And He went up on the mountain and called to Him those He Himself wanted. And they came to Him. Then He appointed twelve, that they might be with Him and that He might send them out to preach, and to have power to heal sicknesses and to cast out demons: – Mark 3:13-15

Many today are seeing people reached for Jesus by being like the world. That is why this trend has continued. But what kind of Jesus are they being reached with? One that conforms to the culture, is just like the world, but has saved the world from it’s sins? What kind of salvation does that bring? It honestly brings a wishy washy salvation. Yes, the people they reach may get saved, may know Jesus as their Lord and Savior, but the example that is being set for these new believers is that you can have Jesus and have the world. After all, that is what they saw when they received Jesus. That is what they continue to see from their new friends and new family. And as they continue their walk with a skewed example of what a Christian life should be, and they come up against obstacles and opportunities, their faith in God is put to the test. And since what they have seen is that the Christian is just like the world, they too become more like the world and less like Christ until they are just like the world and not at all like Christ.

We don’t need more churches and Christians like Starbucks or the latest trend, we need more Christians and churches like Jesus Christ and the Holy Ghost!

God can use anyone, but can only use them and bless them to the extent that they yield to Him. It’s not until we submit all of ourselves and all of our plans and gimmicks and ideas to Him that He can use us and bless us without measure. It’s not what can I do to reach them, but what does He want me to do to reach them.

Are you relevant? The honest answer is – it doesn’t matter. We don’t need to be bothered or occupied with thoughts and ideas and plans of whether or not we are relevant to the culture or the people we are called to reach. What we should be occupied with is being more like Jesus, being led more by the Holy Ghost, and doing more what He tells us to do! In the end, being relevant does not matter, being with Jesus and doing as He commands does.

Previous Post: « Say What – The Power of Your Words
Next Post: The Media Is Not The Message »